‘I don’t agree with it’: Limerick publican ordered to cease trading

Limerick publican Gearóid Whelan and several of his regulars launch a short-lived rebellion against rules allowing only pubs serving food to open, before gardaí enter the premises and request that it close. Video: David Raleigh 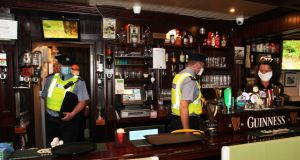 Limerick publican Gearóid Whelan and several of his regulars launched a short-lived rebellion against rules allowing only pubs serving food to open.

Nearly 50 customers passed the doors of Whelan’s Bar on Maiden Street, Newcastle West, after it opened at 10.50am on Monday – proof, said Mr Whelan, that pubs can operate safely, even in a time of Covid-19.

Pat Reidy, from Ardagh, was one of the first in “to support Gearóid”. Reading a newspaper in his socially-distanced chair, the 62-year old said the ban on non-food pubs is “an injustice”.

“I think it is great the Whelan’s took the stance on this. A big mistake has been made by the Government, and I hope they look at this and move on from it,” Mr Reidy added.

“They’re all very delighted and very supportive of us to be able to open our door after four and half months,” Mrs Whelan said.

She said it was an emotional day, after being closed for more than four months: “We run a very good house, never any trouble, and we have very good clientele, there’s no messing tolerated in this premises.”

Mr Whelan’s father, Pat (72), who has pulled pints in the town for 55 years, supported his son: “I think he’s done the right thing, he’s not breaking any law. The pubs have been unfairly treated.”

Reflecting the views of many rural publicans, Mr Whelan said: “Just give us a chance, let us prove that we can do this, that’s all we ask, just a fair level playing field.”

At 1pm gardaí entered the premises and requested Mr Whelan to close, handing him a copy of the regulations that require pubs not serving meals costing €9, or more, to close.

“I’m complying with their advice and I’ve closed my doors,” Mr Whelan said. “I don’t agree with it... We are doing nothing wrong, there’s nothing illegal going on.”

Asked if gardaí had said he could face penalties if he stayed open, he replied: “Let’s just say I was advised to close, yes, long term it might not be the best for me to stay open.”

“I’m disappointed, gutted, but all I wanted to show was that we can do this. Everyone that was here this morning saw we can offer a Covid-safe, socially-distanced, enjoyable atmosphere, for a couple of pints,” Mr Whelan said.

Local Jamie Mullane (19) said: “We came in to support Gearóid, he’s sticking his neck out on the line, opening up the pub when no one else would.

“How can thousands come in through the airports and a couple of locals can’t come down to the pub. There isn’t much difference in us having a meal here, and how is that going to spread the virus more than just having a pint?”

Daniel Norwood (19) agreed: “We were supposed to be over in Spain on our Leaving Cert holiday, so we said we’d just come down here this morning for one [pint].”