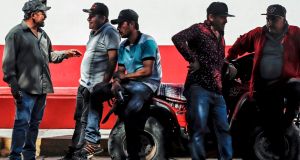 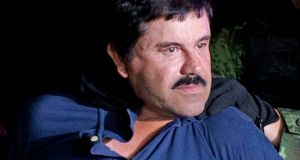 Joaquín ‘El Chapo’ Guzmán in Mexico City on January 8th, 2016, following his re-arrest, six months after he had escaped from a high-security prison. Photograph: Eduardo Verdugo/AP

He was once the most wanted man in Mexico, but many Mexicans barely skipped a beat after hearing the news on Tuesday that a jury in New York had delivered a guilty verdict against the drug kingpin Joaquín Guzmán Loera.

The country appears to have moved on since Guzmán, who is known as El Chapo, was captured three years ago and later extradited to the United States. The days when he transfixed public imagination now seem very distant. Violence has soared, putting to rest any hope that the capture of drug capos like Guzmán would limit the bloodshed.

And corruption – not the drug war – is at the centre of public debate these days. Mexicans have a new president, Andrés Manuel López Obrador, who is disrupting traditional politics and dominating the news cycle.

“The reaction, or rather lack of it, is just a clear reflection of who we are as a country,” said Jacobo Dayan, who studies crimes against humanity at the Iberoamerican University in Mexico City. “Where we have more capacity for outrage is when it comes to corruption, but not so much left for violence,” he said.

Mexican media covered the three-month trial as it peeled back the inner workings of Guzmán’s Sinaloa cartel, the sophisticated reach of his smuggling enterprise and the violence he unleashed against his rivals. There were some surprises, such as Guzmán’s obsession with spying on his wife and mistresses, and the disturbing revelation that he drugged and raped girls as young as 13. But much of the trial offered details that Mexicans already knew or had suspected.

“What was proven in El Chapo’s case is what is universally known in Mexico,” said Esteban Illades, an editor at Nexos magazine, which put the trial on its cover this month. But the magazine highlighted the trial because, he said, “We think it’s fundamental to know our history.”

In Guzmán’s home state of Sinaloa, where the drug kingpin once enjoyed a Robin Hood image, newspapers offered more detailed coverage, analysing what the trial revealed about the drug cartel’s ability to corrupt local politicians and law enforcement.

When Guzmán had been evading the combined pursuit of US intelligence agencies and the Mexican military, he maintained the myth of a benevolent outlaw who used his ill-gotten riches for the good of his community. “Yes, he was the most wanted narcotrafficker, but I also think he gave support to the most humble people, to low-income families,” said Gisel Chavarría, 23, a flower seller in a street market in an affluent neighbourhood of central Mexico City.

His mistake, even before his capture, was to court more fame, said Adrián López, the publisher of Noroeste, a leading newspaper in Culiacán, the state capital in Sinaloa. Guzmán gave an interview to actor Sean Penn and Mexican actor Kate del Castillo that appeared in Rolling Stone magazine, along with a short video. “He broke the basic rule of all Mafiosi, which is discretion,” López said.

The sordid details of his crimes revealed during the trial damaged his image as a charitable folk hero even more. “In the public imagination, he stopped being a benefactor and he was portrayed as he was, a capo who spied on his lovers and associates, who killed, who corrupted officials,” López said.

Guzmán’s latest arrest in 2016 prompted a battle for control of the Sinaloa cartel, but the split seems to have been resolved, López said. The Sinaloa organisation remains the most important cartel in Mexico, he said.

“The fact that Chapo will spend the rest of his life in a prison simply does not mean that the criminal groups and drug gangs will be taken down or dismantled,” said Anabel Hernández, a journalist who has been covering drug crime for more than two decades.

“Mexicans are deeply aware of that and it doesn’t mean they are indifferent to it,” she added. “It is they who are being murdered and made to disappear in the thousands, with or without El Chapo.”

For some Mexicans, the fact that Guzmán was tried in the United States and not in Mexico was proof that Mexico was incapable of imprisoning him and bringing him to justice. “Corruption, corruption,” said Alejandro Reyes Martínez (24), an employee with a private security firm in Mexico City, explaining why Guzmán was sent to the United States. “There the laws are more strict.”

If Guzmán had been tried in Mexico, the testimony about payoffs to high-ranking government officials would have placed Mexican prosecutors in an untenable position. “It’s a Pandora’s box nobody wants to open,” López said.

There was no immediate response from the Mexican government to the verdict. López Obrador has said he wants to focus on preventing future corruption, not pursuing crimes of the past. Dayan said the lack of interest in Mexico in pursuing the corruption allegations that surfaced during the trial revealed the deep failings of the country’s criminal justice system and its rule of law.

“The fact there is so little interest in Mexico, especially on the accusation of alleged ties and claims of corruption of federal officials, demonstrates that we as society, have a structural problem in terms of justice and accountability,” Dayan said.

He added that it was not just Guzmán who was on trial. “It was also Mexico’s justice system and our political class,” he said. – New York Times