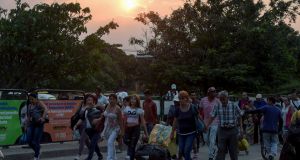 People cross the bridge on the border between Táchira in Venezuela and Cúcuta in Colombia. Photograph: Raul Arboleda/AFP/Getty Images

Diplomatic efforts to solve the political stand-off in Venezuela intensified on Thursday, with the first meeting of the international contact group for the country in the Uruguayan capital of Montevideo.

Opening the meeting, Federica Mogherini, the European Union’s high representative for foreign affairs, said the group’s task “is urgent, and this urgency is due to the worsening of the situation, which runs the risk of destabilising the region, and not only the region”.

The initiative, which brings together European and Latin American states, has the backing of Venezuela’s increasingly isolated president Nicolás Maduro, who is resisting efforts by opponents to oust him amidst a deepening humanitarian crisis in the country.

Last month opposition leader Juan Guaidó declared himself interim president, and has since been recognised by more than 40 countries, including most of those in the Americas. Mr Maduro has denounced him as a puppet in a US-orchestrated coup attempt.

Co-chaired by Uruguay and the EU, the new contact group is the fruit of a diplomatic initiative mounted by Mexico and Uruguay, who declined to join most of the region in recognising Mr Guaidó and have instead sought to bring the two sides in Venezuela to the negotiating table.

Last month Mexico withdrew from the Lima Group, another regional body tackling the crisis, after its other members recognised Mr Guaidó. This has given its current efforts traction with the Chavista regime in Caracas. In a speech to military personnel on Wednesday, Mr Maduro “celebrated” the Montevideo gathering and promised his government’s “absolute backing” for efforts towards dialogue.

Ahead of the meeting, Mexican, Uruguayan and Caribbean diplomats presented what they call the four-step “Montevideo Mechanism”, which calls for immediate dialogue followed by further negotiations based on common ground reached in the initial talks. All going well, efforts will then move to drafting an agreement between the two sides and the eventual implementation of such an accord.

But Mr Guaidó has ruled out participation by Venezuela’s opposition in the Montevideo effort, justifying the decision by claiming the Maduro regime used previous rounds of negotiations as cover for increased repression at home.

“The inevitable consequence of all these processes has been the same – the increase of the regime’s authoritarianism and repression. At the end of each dialogue process there are more political prisoners and fewer rights for Venezuelan citizens,” he said in an interview with Uruguay’s El País newspaper.

The contact group’s terms of reference call for “the holding of new elections with all guarantees for a free and fair electoral process, supervised by international independent observers”. But Mr Maduro has rejected demands for new presidential elections, despite the lack of credibility surrounding the victory that secured him a second six-year term last year.

Despite the terms of reference, Mexico and Uruguay have focused their efforts on starting negotiations between the two sides. The EU has placed greater emphasis on the need for new presidential elections.

Meanwhile, Mr Guaidó gave what he termed “a direct order” for his country’s military to let humanitarian aid arriving in Colombia enter Venezuela. It followed the blocking of a bridge on the frontier between the two countries with two containers and a tanker trailer by Venezuelan army officers. Mr Maduro has denounced the aid as a pretext for an eventual US military intervention.

Hunger has become common in Venezuela after its economy collapsed, shrinking almost by half in the last five years. The UN calculates 3 million people have fled abroad as a result of the crisis.