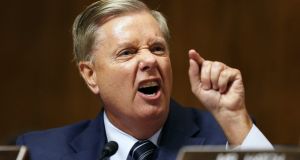 Democratic hopes of securing a majority in the Senate were fading on Wednesday night, as Republicans successfully defended several key seats in Tuesday’s election.

With Republicans controlling 53 of the Senate’s 100-member chamber, Democrats were hopeful of several pick-up opportunities. However, as of Wednesday night they had flipped just two seats.

Mark Kelly successfully challenged Republican Martha McSally in Arizona, while former governor John Hickenlooper was elected in Colorado, replacing Republican incumbent Cory Gardner. But other high-profile races did not go Democrats’ way, despite millions of dollars going into some of the contests.

Susan Collins – who was considered the most vulnerable Republican on the ballot – won her race in Maine. Conceding on Wednesday afternoon, Maine House speaker Sara Gideon said: “We built a movement that will help us make progress for years to come.”

In South Carolina, Lindsey Graham, the Senate judiciary chairman, easily staved off a challenge from Jaime Harrison in one of the most talked-about contests of this election cycle.

The 44-year-old African-American Democratic candidate raised a record-breaking $57 million in the third quarter, much of the money coming from out of state. But it was not enough to dislodge Graham, who comfortably won the southern state by 12 points.

As his victory was declared late on Tuesday, Mr Graham addressed all “the liberals in New York and California” who had donated to his opponent. “This is the worst return on investment in the history of American politics.”

Similarly, Joni Ernst, a first-term Republican in Iowa, was re-elected despite an unexpectedly strong challenge from Democrat Theresa Greenfield. She won the Senate contest with 51.8 per cent of the vote, compared to Greenfield’s 45.2 per cent.

FULL DATA HERE
Inside Politics · US Election: who's won what and what comes next

In North Carolina, Republican incumbent Thom Tillis declared victory, though a final result was not called. With 93 per cent of the vote counted, he was leading his Democrat opponent Cal Cunningham by approximately 100,000 votes.

There was an unexpectedly tight race in Michigan where incumbent Democrat Gary Peters was facing a close challenge from Republican John James. The loss of that seat would be an unexpected blow to Democrats.

As expected, Republicans won back the Alabama Senate seat that had been won by Democrat Doug Jones in 2018. In Georgia, Republican David Purdue was leading Democratic challenger Jon Ossoff by more than 3 percentage points, with 92 per cent of votes counted, though votes were still awaited in the greater Atlanta area.

The second, special election race in the state will go to a run-off in January after no candidate reached the 50 per cent threshold.

While the final results of a significant number of Senate races remained unknown on Wednesday night, it appeared increasingly likely that Mitch McConnell would return as Senate majority leader when the new Congress meets in January. The 78-year-old comfortably won his own Senate race in Kentucky, securing his seventh term in Congress.

There was further disappointing news for House speaker Nancy Pelosi, as it looked probable that Democrats would retain their majority in the 435-member House of Representatives, but with a smaller margin.

Tuesday night saw a reversal of some of the “blue wave” gains Democrats experienced in the midterm elections of 2018. Democrats lost two of the House seats they won in Miami-Dade county in 2018, part of a broader pattern of underperformance by Democrats in that part of Florida, which saw Donald Trump win the state.

Similarly, hopes that Democrats could make gains in suburban Texas also proved unfounded. They failed to flip races in Houston and Austin, and a competitive race in the 24th district in suburban Dallas looked set to go to the Republican candidate.

The disappointing performance by House candidates mirrored a broader pattern which saw Democrats fail to make significant gains in the state at a presidential level despite record early turnout which many had hoped would favour Democrats.

But Conor Lamb, an Irish-American who won a special election in western Pennsylvania in 2017 and won the congressional race there in 2018, was trailing Republican candidate Sean Parnell, also an Irish-American, in the district near Pittsburgh, though final results were not yet known.

The disappointing performance by Democrats in the House contrasted with Ms Pelosi’s optimism on election night. “Tonight, House Democrats are poised to further strengthen our majority – the biggest, most diverse, most dynamic, women-led House majority in history,” she said as the polls closed.

Should Mr Biden be elected president, he will be significantly curtailed in his ability to deliver on policy platforms if Democrats remain in the minority in the Senate.