Ireland’s Armenians: ‘My home has again become a big pile of ruins’

For Aram Hakhumyan and others, the conflict in Nagorno-Karabakh is heartbreaking 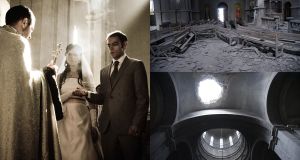 Aram Hakhumyan on his wedding day in 2010 at the Ghazanchetsots Cathedral in Nagorno-Karabakh, and recent images of the damage to the church during the ongoing regional conflict

Ten years ago Aram Hakhumyan and his wife were married in the Armenian Ghazanchetsots Cathedral in Shushi, in the disputed Nagorno-Karabakh region. One month ago Hakhumyan, who has lived in Ireland for seven years, woke up to the devastating news that his family’s beloved cathedral had been badly damaged during air raids in the area.

“The situation is so stressful, my heart is bleeding for my people,” he told The Irish Times from his home in Celbridge, Co Kildare. “I’ve taken time off work just to be able to cope with the situation. My ancestors lived in that area for centuries. Shushi is the city of my grandparents. After the war ended in 1994 we spent 30 years rebuilding it. But now again it has just become a big pile of ruins.”

Hakhumyan says his 21-year-old nephew was left in a coma after he was wounded during the initial days of the conflict over the mountain enclave. He has two brothers fighting on the frontline while his sister, he adds, lost her home in a bombing attack. More than 1,000 people, and possibly many more, have been killed since fighting erupted in late September.

We are only 150,000 people living on a small plot of land in the mountains but we exist and we have the right to live and live in peace

Nagorno-Karabakh, also known as Artsakh, is internationally recognised as part of Azerbaijan but is populated and controlled by ethnic Armenians. On Saturday, Armenia and Azerbaijan again accused each other of bombing residential areas in defiance of a pact between the two countries’ foreign ministers, who met envoys from France, Russia and the United States in Geneva last week.

Three attempts to implement a ceasefire between the sides have failed and Azerbaijan – backed by its chief ally, Turkey – says that by force or through diplomacy it is now determined to retake control of this breakaway region that has been run by its ethnic Armenian majority since a war in the 1990s that claimed 30,000 lives.

Hakhumyan says the only people left in the region are those fighting in the conflict and elderly people who refuse to leave their homes. All the rest have fled seeking safety in Armenia. “The world must understand that this war is not about territory, religion, or anything else, it is about the very existence of people of Artsakh,” he says. “We are only 150,000 people living on a small plot of land in the mountains but we exist and we have the right to live and live in peace.”

Vahe Sasunts, a 23-year-old software developer who was born and brought up in Ireland and is the child of Armenian immigrants, has lost a cousin in the conflict. Sasunts, who recently graduated from Trinity College and started his “dream job” with a large tech company, says watching the violence unfold in the region, where is mother’s family is from, is devastating. He regularly finds his mother reading the news in tears and is struggling to concentrate on his work.

“I thought I was just starting my adult life. I’d finished college, I was gonna save up and buy a house and car, and it just feels like all those things aren’t as important in my life anymore. I feel there’s a part of me that’s always worried now, always anxious, always wondering how my family are back home,” he says.

With communication lines damaged in recent bombings, his family are struggling to stay in touch with loved ones in Nagorno-Karabakh. “We’re trying not to lose hope and faith, we’re just trying to support one another.”

Sasunts is a member of a group of Irish-Armenians who have called on the Government to take a stronger stance on the violence. As a member of the UN Security Council, Ireland must stand up for justice in other nations, he says. “I would like to see Ireland prove that it is really believes in freedom of speech and human rights. It’s what Ireland fought for for years, and we achieved it, but we’re not advocating it for other places.”

In a letter sent to the Oireachtas foreign affairs committee accompanying a petition signed by more than 1,100 people, the Irish-Armenian community said the ongoing conflict grossly violated “all the principles of human rights and international humanitarian law”.

The letter, sent in early October, said further violence in the region could “potentially lead to an absolute catastrophe not only in the south Caucasus but also in the world by provoking involvement of other major countries, causing more destruction and taking more human lives”.

The group has called on Minister for Foreign Affairs Simon Coveney to condemn Azerbaijan for its aggression against the region and Turkey for its political and military involvement in the conflict.

Covid-19 cases are rising, there is not enough oxygen and now they are heavily bombarding hospitals. It’s absolute catastrophe, it really is a humanitarian crisis

Dr Diana Minasyan, an ophthalmologist based in Cork, says the ongoing violence has reignited memories of the 1915 Armenian genocide during which nearly 1.5 million people were killed by the Ottoman Turks. Turkey’s backing of Azerbaijan’s drive to retake the mountainous province further embeds that sense of fear among Armenians worldwide, she says.

Like many Armenians in Ireland, Minasyan, who has Irish citizenship and has lived here since 2002, has family in the contested region and cousins fighting on the frontline. One cousin has been left paralysed after he was hit in a cluster bomb attack, she says. And the coronavirus pandemic continues to be a real problem in the region, she adds.

“Covid-19 cases are rising, there is not enough oxygen and now they are heavily bombarding hospitals. It’s absolute catastrophe, it really is a humanitarian crisis,” she says.

Minasyan signed the petition sent to the Government because she fears the violence could destabilise all of the Caucasus region. She says no Armenian wants to fight but that men are taking up arms to “keep their children safe. All they want is to live their daily lives and have an ordinary life.”

4 Covid-19: Over 2,000 student nurses to leave placements so trainers can return to wards