Suzanne Lynch: America decides, but not yet - how the US presidency is still up for grabs

Analysis: Biden looks set to lose out in Florida but win in Arizona

Networks and former Trump aides dismissed the US president's claim that he had won re-election. Video: ABC/Fox News/Sky News 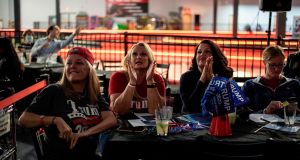 Supporters for Donald Trump cheer as Texas is called for him by Fox News at a watch party for Republicans on election day in Austin, Texas. Photograph: Sergio Flores/AFP/Getty

After four years of head-spinning drama and churning news-cycles, a presidential election in the time of Donald Trump was never going to conclude quietly.

Instead, the election to decide the 46th president of the United States has come down to the wire. As the counting continues on Wednesday morning, the US presidential election result remains on a knife-edge.

As analysts had flagged, the trajectory of election night was always going to depend on Florida. Though AP had still to officially call the state, Trump is expected to be declared the winner.

Signs of his early victory in Florida provided a huge boost to the Trump campaign and a basis for the incumbent to build a path to the 270 electoral votes needed to win the electoral college system.

Despite speculation around a Democratic wave in Georgia and Texas, they appear to have remained out of reach for Democrats

While Biden chalked up early wins in western parts of Florida shortly after polls closed on Tuesday night, Trump over-performed in the state’s largest county, Miami-Dade. The Republican candidate drove up support among Hispanic voters – who represent 70 per cent of the county - proving that Democrats’ niggling doubts about Biden’s popularity with Latino voters were confirmed.

Similarly, the much talked-about senior vote actually held up for Trump. In Sumter County - home of The Villages retirement community - Trump won 67.8 per cent of the vote as final ballots were counted, compared to 68.8 per cent in 2016.

Though Florida exhibits unique demographic features, the pattern we saw in the crucial state was replicated in other states throughout election night – North Carolina and Ohio all showed signs that Biden was ahead as the first groups of votes came in. But as more ballots were counted – and a higher proportion that were cast on election day were tabulated – each state gradually moved into Trump’s column and Democrats hope of a blue wave faltered.

Though an official result has not been announced for Ohio, Georgia and North Carolina – the latter will continue accepting late-arriving ballots until next week and remains too close to call – Trump is leading in all three.

However, despite Trump’s strong performances in these crucial states, it’s all still to play for in the US presidential race. Florida – and to a lesser extent North Carolina – were always essential to Trump’s re-election path. But as counting enters a second day, Biden can afford to lose both states and still win.

Despite disappointing results in Georgia and Texas – two so-called “sunbelt” states that Democrats were eyeing – Biden has won Arizona according to Fox News. The state has not backed a Democratic president since Bill Clinton in 1996. In addition, the senate race was expected to go to Democratic candidate Mark Kelly – his election means that the traditionally Republican-leaning state will now have two Democratic senators.

With voting continuing in states across the country, the 2020 election is now coming down to where the 2016 contest ended – the rust-belt states of the upper mid-west. All eyes are now on the states of Michigan, Wisconsin and Pennsylvania. Trump’s surprise win in all three which delivered him 46 electoral votes four years ago, is once again front and centre in this campaign.

In particular, the state of Pennsylvania is the most coveted state, with 20 electoral votes. But polls show a very tight race here and counting could continue for days. Some early rural counties that have reported show Trump exceeding his performance in 2016 – a worrying trend for Democrats, though they are hoping that turnout in Philadelphia and Pittsburgh will offset this.

As this election night stretches into Wednesday, both candidates have a shot at winning, and it is even possible that the contest could end in a 269 electoral college tie. But even if Biden ultimately emerges as the winner, Democrats will be chastened by this performance.

The ghosts of the 2018 mid-term elections have surfaced on this election night. During the election cycle two years ago, Democratic candidates Beto O’Rourke, Stacey Abrams and Andrew Gillum captivated national attention and money as they threatened to turn three Republican-leaning states – Texas, Georgia and Florida respectively – blue. But while all three candidates performed strongly, it was not enough to flip the states. Two years later, history has repeated itself.

Despite speculation around a Democratic wave in Georgia and Texas, reflecting the changing demographics in these states, they appear to have remained out of reach for Democrats. Once again, the focus is on the blue wall, and whether Joe Biden is the Democratic candidate that can rebuild it.