Volume of retail sales in 19-nation bloc increased by 5.7% month-on-month 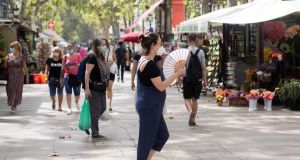 Rambling on Las Ramblas in Barcelona. Spain experienced one of the sharpest increase in sales, up 16.5 per cent. Photograph: EPA

Retail sales across the euro zone jumped back to pre-crisis levels in June, as consumers returned to the bloc’s shops after coronavirus-related lockdowns were lifted.

The volume of retail sales in the 19-nation bloc increased month-on-month by 5.7 per cent in June, according to seasonally adjusted figures from Eurostat - after a record 20.3 per cent jump the previous month. The May figure was revised upwards from a previously reported 17.8 per cent.

Compared with the same period of the previous year, euro zone retail sales were up 1.3 per cent in June.

Clothing and footwear in particular increased, and sales of fuel also continued to rise. But online purchases and mail orders dipped after four months of growth, suggesting consumers were beginning to return to the high street rather than relying on home deliveries.

“The recovery in retail sales has to be seen in the context of very strong online shopping – which we doubt will be sustained - and generous furlough and income support schemes,” said Claus Vistesen, chief euro zone economist at Pantheon Macroeconomics.

Economists question whether the rebound will last, attributing a substantial part of the rise to a release of pent-up demand.

“The next six months will be characterised by rising labour market uncertainty and reduced income support ... the road from here will be bumpy in the headline retail sales data,” said Mr Vistesen.

Spain experienced one of the sharpest increase in sales, up 16.5 per cent. France reported a rise of 9.4 per cent. Germany, on the other hand, recorded a small month-on-month decline of 1.6 per cent, suggesting its release of pent-up demand may already have been exhausted.

Bert Colijn, senior economist for the eurozone at ING, flagged high household savings rates in recent months. “The big question is whether the increase in household savings will lead to people consuming more in the months ahead or whether they will save because of an expected prolonged economic slump,” he said.

Separate data released on Wednesday showed that the services sector in Italy improved in July, while Spain saw a marginal increase in activity.

The IHS Markit purchasing managers’ index for Spain’s services sector increased from 50.2 in June to 51.9 in July; for Italy, it jumped from 46.4 to 51.6. Economists polled by Reuters had expected readings of 52 and 51.1 respectively.

Both countries under-performed France and Germany. France recorded a services PMI of 57.3 while Germany logged 55.6. – Copyright The Financial Times Limited 2020