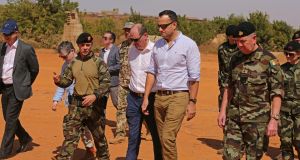 Irish special forces troops are expected to rotate home from Mali by the end of April, despite a request from the United Nations to extend their mission due to coronavirus.

Fourteen Army Ranger Wing (ARW) personnel were deployed to the troubled west-African nation last year in a counter-terrorism role as part of a UN stabilisation mission.

The current contingent were due home at the end of April but this was thrown into doubt when UN secretary-general António Guterres ordered all rotations be delayed until June 30th to prevent personnel bringing coronavirus into vulnerable countries.

However, the Government has decided to ask for an exemption to the order and has requested Germany to aid in the repatriation of the Irish troops. It is understood discussions on logistics are nearly complete and the soldiers will likely be brought home in about a week before self-isolating for 14 days.

The ARW replacement personnel will also be flown to Mali by the German Luftwaffe. It is understood the outgoing troops are already in isolation in Germany in preparation for deployment.

Seven Irish troops serving in Mali under a separate EU training mission were repatriated over the weekend in a joint Spanish/Irish operation.

Questions remain over when the far bigger Irish peacekeeping contingent on the Unifil mission in Lebanon will be rotated home. Sources in the Department of Defence said bringing the 380 person contingent home is far more complicated due to its size and UN worries about their replacements bringing coronavirus into Lebanon.

Officials fear a repeat of its mission to Haiti in 2010 when peacekeepers brought in cholera, which went on to kill some 10,000.

Irish Defence officials have drafted several contingency plans, including having the replacement troops self-isolate in billets at the Glen of Imaal training grounds in Wicklow for two weeks before deploying.

The Irish Unifil troops were originally due to rotate in mid-May. “It’s much tougher than the Malian situation. We’re trying but we just don’t know if it will happen. We don’t want to get families’ hopes up,” a defence official said.

A department of Defence spokeswoman said officials were “engaging with the mission and with mission commanders and examining options around the facilitation of a rotation for UNIFIL, that would take place as close as possible to the original planned dates in May”.

Independent TD and former ARW commander Dr Cathal Berry said if troops can be brought home from Mali, there is “no reason” they cannot come home from Lebanon.

“The soldiers have no problems but it’s very tough for the families. There are people out there who haven’t seen their first-born child.”

Unlike most other EU countries, Ireland does not have long-range military transport aircraft, meaning it has to rely on charter flights to move troops. Dr Berry said there is no reason Aer Lingus cannot be used. “If they can fly to China to collect PPE they can fly to Beruit,” he said.

The Representative Association of Commissioned Officers (Raco) also called on the Government “to expend all necessary efforts to ensure our citizens in uniform can return safely to their families, as others have, while adhering to public health advice”.

The UN said countries can ask for exemptions to the extension if they can guarantee adequate quarantine measures for troops.

UCD foreign policy professor Ben Tonra said it is “out of character” for Ireland not to comply with UN directions.

“But the UN has to deal with what it’s got and there is always a recognition that member states will act in their national interest.” He said, while the move “won’t be a black mark against us” with the UN, it could impact Ireland’s campaign for a seat on the Security Council.

Dr Berry said bringing the troops home may even enhance Ireland’s standing with the UN. “It would prove we are a first-world nation capable of adhering to strict conditions.”