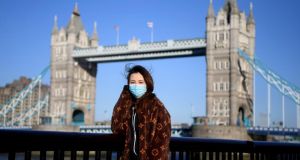 A woman wears a protective mask in front of Tower Bridge in London. There have now been 5,683 diagnosed cases in the UK and 281 deaths. Photograph: Alex Davidson/Getty

A further 47 people have died in the United Kingdom after testing positive for coronavirus, bringing the total number of deaths to 281, the British government said on Sunday.

Meanwhile, the global number of coronavirus cases has doubled in a week to more than 300,000, it was reported on Sunday morning.

There have been more than 13,000 deaths and around 96,000 people have recovered from the virus.

It also emerged on Sunday that the organisers of the Tokyo Olympics are considering plans to delay the event.

Here is a synopsis of the main developments in the Covid-19 crisis around the world on Sunday.

The death toll from the outbreak of coronavirus in Italy has risen by 651 to 5,476, officials said on Sunday, an increase of 13.5 per cent but down on Saturday’s figure when some 793 people died.

The total number of cases in Italy rose to 59,138 from a previous 53,578, an increase of 10.4 per cent, the country’s civil protection agency said - the lowest rise in percentage terms since the contagion came to light on February 21st.

Of those originally infected nationwide, 7,024 had fully recovered on Sunday compared to 6,072 the day before. There were 3,009 people in intensive care against a previous 2,857.

The hardest-hit northern region of Lombardy remained in a critical situation, with 3,456 deaths and 27,206 cases against a previously given 3,095 and 25,515 respectively.

Spain’s death toll from coronavirus soared to 1,720 on Sunday from 1,326 the day before, according to latest data from the health ministry. The one-day rise in deaths of 394 was higher than the previous day’s increase of 324.

The government is reported to be extending its state of emergency by another 15 days. As well as 394 new deaths, the country reported the number of confirmed cases has risen by 3,646 from 24,926 to 28,572.

Germany has seen its cases jump by more than 1,000 overnight. The number of confirmed coronavirus cases in has risen by 1,948 (12 per cent) to 18,610, and the number of deaths has increased by nine (20 per cent) to 55, the country’s public health institute said.

Australian prime minister Scott Morrison on Sunday ordered many venues, including pubs, casinos, gyms and cinemas, to close from midday Monday to combat coronavirus after many people appeared to disregard health warnings and congregated in large numbers in recent days. After an initial relatively slow spread, the number of infections in Australia has risen quickly, climbing to 1,098 confirmed cases as of Sunday with seven deaths linked to the illness. “I am deeply regretful that those workers and those business owners who will be impacted by this decision will suffer the economic hardship that undoubtedly they will now have to face,” Mr Morrison said in a national address on Sunday evening. Restaurants, cafes and catering businesses will be restricted to delivery and take-away services, Mr Morrison said.

Earlier, Australia has unveiled a 66.4 billion Australian dollar (€30bn) stimulus package in a bid to ward off a recession and safeguard employment from the coronavirus pandemic. The package includes cash payments for eligible small businesses and welfare recipients. The total economic assistance packages so far total almost 10 per cent of the country’s GDP.

The UK has been stepping up measures to fight the virus that have so far been less stringent than elsewhere in Europe. People identified as belonging to one or more of the at-risk groups include those who have received organ transplants, those living with severe respiratory conditions or specific cancers, and some receiving certain types of drug treatments. They will be contacted by their doctor strongly advising them to stay at home for a period of at least 12 weeks. “If you receive a letter it is vitally important that you act on it for your own protection, don’t attend any gatherings of friends or families and don’t go out for shopping, leisure or travel,” said Paul Johnson, director at Public Health England.

Hundreds of millions of Indians stayed indoors on Sunday, heeding prime minister Narendra Modi’s appeal to citizens to self-isolate as authorities battled to contain the fast-spreading epidemic. At least 324 people have so far contracted the disease and four deaths were reported in India due to coronavirus, according to official data on Sunday. While the curfew is voluntary and is not an outright ban on the movement of people, Mr Modi’s national appeal for social distancing has helped dramatically reduce the number of people taking to India’s densely crowded streets.

Experts have warned that the country’s cases are growing at rates seen during the early stages of the outbreak in other countries, which subsequently reported exponential increases in infections. With over 1.3 billion people, India is trying to battle a pandemic with limited resources.

coronavirus outbreak. The railways ministry said passenger rail will stop with immediate effect though freight services will continue, according to a statement on Sunday.

US president Donald Trump said negotiators in Congress and his administration are “very close” to agreement on a coronavirus economic-relief plan that his economic adviser said will aim to boost the US economy by about $2 trillion (€1.85 trillion). The economic measure is intended to to “keep companies together, keep workers paid, so they can live and sustain,” Mr Trump said at a White House briefing. “We’re asking people not to work because we have to stay away from each other,” he said, adding that the hope is to “win with as few lives lost as possible.”

The Chinese city of Wuhan, where the global pandemic was first detected, went a fourth consecutive day on Sunday without reporting any new or suspected cases of the virus.

Elsewhere, the country reported 46 new cases over the previous 24 hours, 45 of them coming from overseas. The health ministry did not say where the domestic case was found.

Another six deaths were also reported, one in Wuhan, four in the surrounding province of Hubei and one elsewhere.

Wuhan must go 14 straight days without a new case in order for draconian travel restrictions to be lifted and the city remains isolated from the rest of the province, which is itself closed off to the rest of the country. Even while social distancing and quarantines for new arrivals remain the norm, China is striving to restore activity in the world’s second-largest economy.

Wuhan is a centre of China’s crucial auto industry and a special train carrying more than 1,000 employees of Dongfeng Motor Corporation arrived in the city on Saturday for the first time since the outbreak. All were sent directly by bus to factories or residential communities.

In Iran, the death toll rose has risen by 129 (8 per cent ) to 1,685 over the past day, and the number of cases has risen by 1,028 (5 per cent ) to 21,638. Iran’s supreme leader has refused US humanitarian assistance to fight the outbreak, citing an unfounded conspiracy theory that the virus could be man-made by America. Washington has offered to help Iran while refusing to lift crushing sanctions.

Singapore said it will fully shut its borders from Tuesday after recording its first two deaths.

The city-state has banned visitors from several countries and requires all short-term visitors to observe a 14-day home quarantine. But the government said that from Tuesday all short-term visitors will be barred from entering or transiting through the country. The city-state of nearly 6 million people has recorded 432 cases so far. On Saturday, it reported that a 75-year-old Singaporean woman and an Indonesian visitor, 64, have succumbed to the virus.

South Korea reported 98 more cases of the new coronavirus on Sunday, taking the total to 8,897.

Deaths increased by two to 104, according to the state-run Korea Centres for Disease Control and Prevention.

The Palestinian Health Ministry has announced the first two cases of the coronavirus in the Gaza Strip. The ministry said early on Sunday that the cases were two people who returned recently from Pakistan.

Colombia has reported its first death from the new coronavirus. Officials said he was a 58-year-old taxi driver who had driven tourists from Italy, one of the countries worst hit by the virus.

The Romanian government confirmed on Sunday the first death in the country due to coronavirus. The deceased was a 67-year-old man who had been suffering from terminal cancer.

Kosovo authorities also reported the first Covid-19 death in that country. The Infectious Clinic said the fatality was an 82-year-old man. The patient was admitted to hospital a week ago with “mass pulmonary and pneumonia indications” and was also suffering from other cardiac and lung chronic diseases. He contracted the virus from his son and daughter. –Reuters, PA, Bloomberg, Guardian