Ryanair to reduce pay by 50% until end of May 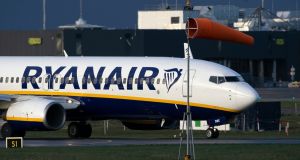 Ryanair boss Michael O’Leary counselled that the EU had to be careful how it distributed aid to the industry.

Ryanair is halving pay across the board for two months as it continues to grapple with the Covid-19 crisis.

Group chief executive Michael O’Leary told the Financial Times on Friday that it was cutting pay by 50 per cent for all staff, including himself, for April and May.

Mr O’Leary told the newspaper that Ryanair’s priority was to preserve cash for “three, six, nine maybe even 12 months” to survive.

He said that no one had any idea when the crisis would end.

Ryanair has cash and cash equivalents of €4 billion along with undrawn credit.

A spokesman for trade union Fórsa, which represents pilots and cabin crew working for Ryanair in the Republic, noted that other carriers have taken similar steps.

“The one good thing is that jobs are being retained,” said the spokesman. “That’s a positive in a situation that’s othewise very concerning right across the industry.”

Earlier this week, Aer Lingus told staff that it was cutting pay by 50 per cent at every level in the organisation for April and May.

The airline pointed out that the reduction was necessary to safeguard the company’s future and that the unions which represent workers there supported the move.

Mr O’Leary said Ryanair was waiting to hear details of the Irish and UK governments’ programmes to help workers during the crisis.

He argued that payroll support for the next two to four months was the only way to avoid mass lay-offs in the industry.

The airline chief executive noted that carriers and airports would have no customers and no revenues over the next two months.

Mr O’Leary added that Ryanair would review its position at the end of May and warned that he could not rule out job cuts further down the line.

The organisation said that the industry supported about 12 million jobs in Europe alone but was facing a cash-flow crisis. “Support measures are urgently needed,” said Iata.

Mr O’Leary counselled that the EU had to be careful how it distributed aid to the industry.

He maintained that governments needed to be careful not to create “massive distortions” that would leave well-run airlines at the mercy of nationalised carriers.

1 Huawei asks Samsung and SK Hynix for chip supplies in face of US isolation
2 Pricewatch: Coronavirus has given us four categories of shopper
3 Denis O’Brien forced to lift hood on Digicel in debt restructuring
4 Aston Martin chief to leave as part of shake-up
5 Chicken farmer sues Revenue over failed family business
Real news has value SUBSCRIBE