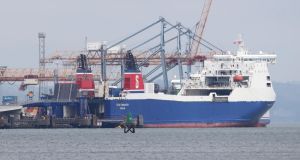 Britain and the European Union must move urgently to agree how the Northern Ireland protocol will operate, regardless of the outcome of talks on a free trade deal, the House of Lords EU committee says in a report published on Monday.

It says that both sides share responsibility for the delay and uncertainty surrounding how the protocol’s requirements on customs, regulation and taxation will be implemented when the post-Brexit transition period ends seven months from now.

“On the one hand, the UK government has been unable to explain precisely or consistently what it agreed with the EU. On the other, the EU’s insistence that ‘the rules are the rules’ has left Northern Ireland businesses fearing that there will be no flexibility to apply the protocol proportionately. This has led to a diminution of trust between the two sides, with the upshot, in the words of a witness, that Northern Ireland has felt like ‘a pawn in the game’,” the report says.

The 105-page report analyses each article in the protocol, detailing what must be agreed for each to be implemented. It outlines the extensive responsibilities of the EU-UK joint committee in determining how the protocol should operate. And it urges the two parties to move quickly to set up a meeting of the Joint Consultative Working Group established under the protocol.

The working group does not have decision-making powers but will exchange information about the implementation of the protocol, planned EU acts within the scope of the protocol, and the fulfilment of mutual obligations.

Committee chairman Charles Hay, the 16th Earl of Kinnoull, told The Irish Times that Britain and the EU could not wait for progress on the free trade agreement to nail down the detail of the protocol.

“It is important for both sides to realise that they need to get on with discussing the boring detail of stuff,” said Lord Kinnoull. “And I accept that the boring detail will change depending on whether a free trade agreement results. But you might as well get on with talking about it now, because we can see that these discussions about the main event of the future negotiations are bogged down and because of external events the EU doesn’t have the bandwidth to deal with it in next month or so,” he said.

Lord Kinnoull said the committee, which includes former diplomats Michael Jay, John Kerr and Peter Ricketts, was impressed during its visit to Belfast with the willingness of politicians of all stripes in Northern Ireland to work together on preparing for the protocol’s changes. And he is confident that Britain will fulfil its obligations around the protocol, despite some ministers’ public pronouncements.

“I really don’t believe that Britain would suddenly become the sort of nation that doesn’t live up to its word,” he said.

“Our committee is full of people who’ve been in the business of negotiations over many years. They would be absolutely appalled if Britain didn’t live up to its international obligations and they’ve spent their careers trying to make sure that we do.”