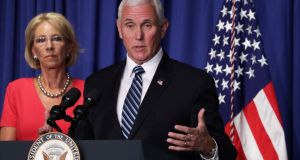 More than 60,500 new COVID-19 infections were reported across the United States on Thursday, according to a Reuters tally, setting a one-day record as weary Americans were told to take new precautions and the pandemic becomes increasingly politicised.

The total represents a slight rise from Wednesday, when there were 60,000 new cases, and marks the largest one-day increase by any country since the pandemic emerged in China last year.

As infections rose in 41 of the 50 states over the last two weeks, Americans have become increasingly divided on issues such as the reopening of schools and businesses. Orders by governors and local leaders mandating face masks have become particularly divisive.

“It’s just disheartening because the selfishness of (not wearing a mask) versus the selflessness of my staff and the people in this hospital who are putting themselves at risk, and I got Covid from this,” said Dr. Andrew Pastewski, ICU medical director at Jackson South Medical Center in Miami.

“You know, we’re putting ourselves at risk and other people aren’t willing to do anything and in fact go the other way and be aggressive to promote the disease. It’s really, it’s really hard,” he said.

Stephanie Porta, 41, a lifelong Orlando, Florida, resident, said only about half the shoppers at her grocery store wore masks, though that was more than she saw two weeks ago.

“They’re trying to make everything seem normal, when it’s not. People are dying, people are getting sick. It’s insane,” she said.

Governor Ron DeSantis called the rising cases a “blip” and urged residents not to be afraid.

“I know we’ve had a lot of different blips,” DeSantis said. “We’re now at a higher blip than where we were in May and the beginning of June.”

Florida is one of the few states that does not disclose the number of hospitalised Covid patients. But more than four dozen Florida hospitals reported their intensive care units reached full capacity earlier this week.

In Texas a group of bar owners sued Governor Greg Abbott, a Republican, saying his June 26th order closing them down violates the state constitution, the Dallas Morning News reported.

Dr. Robert Redfield, director of the US Centers for Disease Control and Prevention, said Thursday that keeping schools closed would be a greater risk to children’s health than reopening them.

California and Texas, the two most populous states, announced record increases in Covid-19 deaths on Wednesday.

California has seen cases and hospitalisations surge, even though it imposed one of the strictest lockdowns.

Australia will halve the number of citizens allowed to return home from overseas each week, prime minister Scott Morrison said on Friday, as authorities struggle to contain a Covid-19 outbreak in the country’s second most populous city.

Since March, Australia has allowed only citizens and permanent residents to enter the country. Once they arrive, they enter a mandatory 14-day quarantine in hotels, which is paid for by state governments.

Morrison said from Monday, Australia will cap the figures at 4,000 people each week, about half the number that have been returning. Those who return will also have to pay for their quarantine stays.

“The decision that we took ... was to ensure that we could put our focus on the resources needed to do the testing and tracing and not have to have resources diverted to other tasks,” Morrison told reporters in Canberra after a meeting of the national cabinet.

Neighbouring New Zealand enacted measures earlier this week to limit the number of citizens returning home to reduce the burden on its overflowing quarantine facilities.

Residents in the Australian state of Victoria have been told to wear masks when outside after a record 288 new coronavirus cases were recorded.

Melbourne went into lockdown again on Wednesday night for six weeks after a flare-up in the number of infections.

Mr Sutton said: “Our numbers are the numbers that the US gets every 10 minutes.

“We are still in a fortunate position and we have gone to a lockdown at this juncture in order not to have those kind of pressures manifest in our system.”

Victoria has become the first state in Australia to recommend its residents wear masks if they cannot maintain 1.5 metres of social distancing in public.

Outside of Victoria, most of Australia’s Covid-19 cases have been detected in hotel quarantine.

Bolivia’s interim president and Venezuela’s number two official have tested positive for coronavirus, days after Brazil’s president was hit by the pandemic.

The infections in Venezuela, Brazil and Bolivia, which is seeing a spike in cases, come after Honduran president Juan Orlando Hernandez tested positive in June and was briefly treated in hospital.

Jeanine Anez said she will remain in isolation for 14 days when another test will be done, but she will continue to work remotely from the presidential residence.

Bolivia’s health ministry said the country has 42,984 confirmed coronavirus cases and 1,577 deaths, and is seeing an increase in the number of new cases amid reports that hospitals are being overwhelmed in some regions.

Meanwhile, in Venezuela, socialist party chief Diosdado Cabello revealed that he had tested positive for Covid-19, making him the highest-ranking leader in the South American nation to come down with the virus so far.

Mr Cabello is considered the second-most powerful person in Venezuela after president Nicolas Maduro and made the announcement on Twitter, stating that he is isolated, getting treatment and will overcome the illness.

Venezuela is considered one of the world’s least prepared countries to confront the pandemic, as hospitals are routinely short on basic supplies like water, electricity and medicine.

The nation has registered considerably fewer Covid-19 cases than others in the region, but the number of infections has grown in recent weeks.

As of Wednesday, the government had reported 8,010 confirmed cases and 75 deaths.

“Venezuela is with Diosdado,” Mr Maduro said. “I am sure soon enough we will continue on in this fight.”

In Brazil, president Jair Bolsonaro was diagnosed with Covid-19 on Tuesday.

He appeared on an online broadcast from the presidential residence on Thursday as defiant as on previous occasions.

He coughed once, but did not show other symptoms of the disease that has killed more than 69,000 people in the South American nation. – Reuters/AP