Child labour increasing in lockdown Uganda while schools are closed 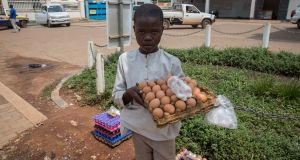 Every morning soon after dawn, 10-year-old Moses leaves home carrying trays of hard-boiled eggs and walks for half an hour to sell them outside a petrol station in the Ugandan city of Gulu.

With schools closed indefinitely since the nation went into a strict lockdown to fight Covid-19 in March, Moses is among some 15 million Ugandan children at risk of being forced to work as families are pushed towards extreme poverty, charities say.

After seven hours hawking his eggs, which sell for 500 Ugandan shillings (€0.12) apiece, and doing his best to avoid police enforcing the lockdown, Moses picked up his trays and headed home. “Business isn’t good. We won’t have enough food,” he said, as a group of boys, also selling eggs, ask him how his day had been.

A Save the Children report carried out in May found 56 per cent of Ugandans had noticed an increase in child labour since the beginning of the lockdown.

“[There are] children in the streets selling stuff, selling alcohol, selling food in the markets. But also some of the big gold mines – we’ve had quite a few reports of more children going to work there,” said Alun McDonald, head of advocacy and communications for Save the Children in Uganda.

He said the charity had also been getting reports about increasing numbers of teenage girls being drawn into sex work to help their families make ends meet and buy everyday goods including food and sanitary pads.

The pandemic has put millions of children worldwide at risk of being pushed into labour, reversing two decades of work to combat the practice and potentially marking the first rise in child labour since 2000, the United Nations warned in June.

Uganda implemented one of Africa’s strictest lockdowns to curb the coronavirus and has kept infections relatively low at under 1,000 cases, with no deaths. The government has loosened some of the restrictions but many remain.

While lessons are being broadcast by state television and radio stations, government officials have acknowledged many children do not have access to them.

Last week, education minister Janet Museveni said the ministry was “in advanced stages of developing home-schooling study materials for the entire primary and secondary education levels”, while continuing to assess when schools can reopen.

In the meantime, the government has pledged to provide all households with a radio so children can tune into lessons, but it is not clear when that will happen. Rights groups fear many children may never return to school, especially those from poorer communities that could struggle to pay school fees and other necessary expenses such as exercise books and uniforms.

“The longer children are out of school and the longer the situation goes on, the less likely they are to go back,” McDonald said.

Moses lives with his grandmother, Fatima Khamis (45), who looks after 16 children in total. As the only elder in her extended family, she is expected to care for relatives’ children in a crisis situation, such as the pandemic.

Before the lockdown, Khamis used to run her own business selling snacks to students, but she had to shut down as customers stayed home. Government food aid has barely covered the capital city, Kampala, and Khamis has received only 3kg of beans and 5kg of rice since the coronavirus curbs took effect.

Besides Moses, two other girls work selling samosas but the household’s meagre income only stretches to one meal a day now. “Life has become so hard,” she said.

Some of Khamis’s wards are orphans, some are her own children, and others have been placed in her care because their parents were unable to look after them.

Moses’s father is out of work, while his mother got stuck in southern Uganda when the lockdown started. Even before the pandemic shut down her business, the four youngest school-age children living with Khamis were not attending classes because she could not afford to pay school fees and buy books, paper and pens.

Standing next to one of Gulu’s main roads, 13-year-old Nyero Kaka Rashid has been selling eggs full-time since the schools closed. Before the lockdown, he worked only at the weekend.

A tray of 30 eggs sells for 10,000 Ugandan shillings (€2.40), but he said business had dried up during the pandemic. “There’s no money,” he said, adding that several of his four siblings were also working. “Many children are doing it.”

McDonald, of Save the Children, said the charity had heard numerous complaints by child workers about harassment by police, who ordered them home and sometimes seized their goods.

Another teenage street vendor, Omara Mark Desmond (13), sells about 40 face masks a day for 1,000 Ugandan shillings each, giving his earnings to his mother, a tailor who has been without customers since the lockdown started.

Working life on the streets is tough, he said, often leaving him too tired to catch up on his school books. “I like school. I’m feeling very bad because right now I should be in a lesson.” – Thomson Reuters Foundation