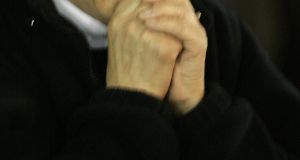 Religious organisations were reluctant to give access to HSE staff during the crisis as residents were cocooning in accordance with Government regulations. Photograph: Dylan Martinez

The Covid-19-related deaths of four nuns in a convent in the southwest highlights the need to review such unregulated care homes, researchers have said.

The four nuns died, and 12 out of 14 in their order tested positive, as the care system “collapsed” in their home during the height of the pandemic, according to an article published in an academic journal.

The “significant” outbreak of the disease in the residence of a religious order “highlights the need to review these unregulated homes”, the authors, geriatricians from the Health Service Executive, Mercy hospital in Cork and Clonakilty community hospital, say.

The order provided the staff for the home, whose residents were aged 76 to 103. In mid-March, one resident was hospitalised with Covid-19 and later died. Within days, staff and other residents developed symptoms and the care system “collapsed”, according to the case study published in the Journal of Nursing Home Research Sciences.

A second patient was admitted to hospital with confirmed Covid-19 and died there in early April. After the local community support team learned that care supports were failing, seven nuns were transferred to two local hospitals. One “moribund” patient stayed in the convent and died, while three healthy nuns also stayed.

Overall, 12 nuns tested positive, four died, three remained in the convent and seven, with an average age of 93, were transferred to a local HSE rehab ward.

Religious organisations were reluctant to give access to HSE staff during the crisis as residents were cocooning in accordance with Government regulations, according to the geriatricians who authored the article.

Along with private nursing homes, religious orders do not fall under the remit of the HSE and there was limited existing knowledge of their services when support was being organised. While some religious homes had an infirmary to manage frail residents, they were unable to respond to the increased nursing needs during the outbreak.

The article says a key learning was the importance of onsite visits to the larger religious organisations to observe social distancing, hygiene arrangements and staff training.

Generally, the authors say nursing homes had concerns during the pandemic about the supply of personal protective equipment and did not have access to rapid or universal testing. “Testing was available but it was slow and results were not received fast enough.”

They say religious and other unregulated homes should be brought under the guidance of regulatory authorities and clear advance care directives should be in place before any future outbreak. These should deal with resuscitation, tube feeding and transfer out to hospital with a defined level of care for residents.