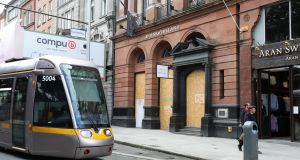 House of Ireland, a tourist-focused giftware retail group with high-profile outlets in Dublin and Belfast, is shutting down, as damage from the coronavirus pandemic begins to take its toll on the beleaguered tourism and retail sectors.

Five companies associated with the group have called creditor Zoom meetings for later this month to appoint a liquidator to the business, which has been operated for 45 years by the Galligan family.

The group’s flagship outlet on Grafton Street in Dublin, as well as its outlets at Dublin Airport and Belfast City Airport, will close permanently, along with its online store. The outlets, which specialise in Irish crafts and gifts, shut their doors along with other retailers in March as the country went into lockdown.

“With the tourist market decimated and the future very uncertain as to when it will recover, the directors have been advised to put the business into liquidation,” said the company. “We acknowledge this is a very difficult time for our suppliers and very much regret that we are no longer in a position to trade with them. This is a very sad day for our family.”

The company also thanked its employees, who were informed of the closures on Thursday. Up to 50 staff are believed to be affected.

Before the virus hit, House of Ireland had been planning an expansion of the business, with inbound tourism to Ireland at record highs in recent years. The company had signed a lease for a new outlet in the Frascati centre in Blackrock, Co Dublin, while company filings also suggest that a new outlet was being planned for the tourism hotspot of Killarney in Co Kerry. The new entity, House of Ireland Killarney, is not among the five being placed into liquidation.

The business was started in the mid-1970s on Dublin’s Nassau Street, close to where its rival, Kilkenny Group, trades. Around 18 months ago, the flagship shifted from there to a large former bank premises at the bottom of Grafton Street, after it was incentivised to move by US fund Meyer Bergman, which is redeveloping the Nassau site.

It is understood that Mark Galligan, the founders’ son and the company chief executive, had expressed disappointment over the footfall at the new location.

House of Ireland last year had a row with its new landlord at Frascati over building works at the centre. A court case between them appears to have been settled in December, and it was envisaged before coronavirus hit that the new unit would go ahead. House of Ireland sought planning permission for a cafe in the new unit.

The finances of House of Ireland are not consolidated into a group and are spread across the five entities going into liquidation, making an accurate appraisal of its position more complicated.

A charge over House of Ireland’s assets, including its website and fittings, was registered in favour of Mr Galligan and Anne-Marie Tobin in March, at around the time the business shut due to the pandemic.

The group appears to be owned 50/50 by Mr Galligan and Anne-Marie Galligan through a shareholder company, Markam Investments, which has equity on its balance sheet of €2.2 million and is being liquidated.

House of Ireland added that the difficulties the business faced were “a scenario facing many Irish indigenous SMEs at the current time”.