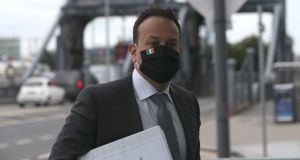 A new plan for the country’s response to the Covid-19 pandemic will see health officials and the Government strive to get Ireland into a “status blue” period where the virus is suppressed, it has emerged.

The Government intends to move away from the current “phased” approach to reopening society and the economy to a new plan that will see different colour-coded statuses depending on the levels of Covid-19 in any given area.

The Cabinet committee on Covid-19 met on Tuesday and Ministers discussed the new nine-month plan which will detail how the country can safely live alongside the virus in the future.

The approach taken in New Zealand to try and fully quash the virus will not be adopted here, sources say.

Officials are keen to move towards a colour-coded plan consisting of red, orange, yellow and blue statuses.

However, the blue status will only come into effect when vaccinations are available or there is some other kind of medical breakthrough that suppresses the coronavirus.

“It would be useful if this was seen by the public as something akin to a weather warning, that people instinctively knew what they can do depending on the colour. The reason green is not included in there is because green almost says that everything is okay and things can go on as normal, which for now is not the case,” a source said.

It is also understood that health officials are against the idea of local lockdowns, believing a national and regional response to be sufficient. Different sectors of the economy will have to detail their plans for outbreaks and public health risk assessments will become vital in local areas under the new framework.

Ministers also discussed economic measures for the three midlands counties that are in lockdown.

The Government’s package of economic supports for the region will be designed in a way that allows it to be applied to other parts of the country which go into lockdown in the future, sources said. With further localised outbreaks of the disease likely, the aim is to draw up something which can be repeated again.

Speeded-up access to schemes or prioritising applications from affected areas may be considered in order to support businesses in the three counties.

Meanwhile, publicans met with Tánaiste Leo Varadkar and Minister for Public Expenditure Michael McGrath on Tuesday to discuss a range of extra support measures for the industry.

Speaking after the meeting, Mr Varadkar told The Irish Times the “Government appreciates that many pubs’ survival is being threatened due to a closure order that is going on for longer than any of them expected”. He said the Government wanted to ensure pubs “survive long enough to reopen when that’s possible”. Mr Varadkar also said the Government would examine giving greater powers to the Health and Safety Authority to inspect workplaces. This followed calls to close a legal loophole which means meat plants and other employers have no obligation to report transmission of Covid-19 to the HSA.

Separately, it emerged on Tuesday night that all 210 workers at Carroll Cuisine in Tullamore, Co Offaly, who were tested for Covid-19 on Sunday have received negative results.

The staff were tested by Health Service Executive public health specialists at the weekend after nine staff at the facility had contracted the disease.

A spokesman said operations at the facility, which ceased on Monday, would remain suspended until after consultations had taken place with HSE staff.

The factory is one of four large meat processing plants in the Midlands which have been hit by outbreaks of Covid-19.

The results come as the latest figures show there has been one new Covid-19-related death and 35 new cases reported to the Health Protection Surveillance Centre. This is the lowest number of daily cases since July 29th. Acting chief medical officer Dr Ronan Glynn warned the daily number of new cases was likely to “rise and fall” this week. Also on Tuesday, it emerged that a ward at Naas General Hospital in Co Kildare has been closed due to a suspected Covid-19 outbreak, with a number of staff currently self-isolating as a result.