Romanian PM fined for breaking own restrictions during birthday gathering 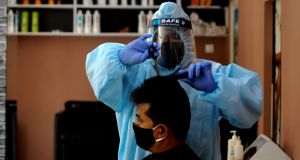 Coronavirus has infected more than 5.9 million people across the world and killed more than 365,000, according to a tally kept by Johns Hopkins University.

The country registered another record single-day jump of 7,964 coronavirus cases and 265 deaths, a day before the two-month-old lockdown is set to end.

The health ministry put the total number of confirmed cases at 173,763 with 4,971 deaths. The infections include 82,369 people who have recovered.

More than 70 per cent of the cases are concentrated in Maharashtra, Gujarat, Tamil Nadu, New Delhi, Madhya Pradesh and Rajasthan states.

Prime minister Narendra Modi, in an open letter marking the first year of his government’s second term, said India is on the path to victory in its battle against the virus. He said India will set “an example in economic revival” and asked the nation to show a “firm resolve”.

India started easing lockdown restrictions earlier this month, allowing the reopening of shops and manufacturing and the resumption of some train links and domestic flights.

But the government is expected to issue a new set of guidelines this weekend, possibly extending the lockdown in worst-hit areas.

Disinfection teams swept Istanbul’s Grand Bazaar and the resumption of domestic flights was announced as Turkey prepares to lift many remaining coronavirus restrictions.

Teams scrubbed the floors of the 15th century bazaar, which has been closed since March 23rd, ahead of Monday’s return to business.

The chair of the bazaar’s board of directors said shoppers would have their temperatures checked on entry and visitor numbers would be restricted.

The government said the first air routes between Istanbul, Ankara, Izmir, Antalya and Trabzon would restart Monday, with others following gradually.

Spain’s coronavirus death toll rose by four on Saturday to 27,125, the health ministry said, reflecting a dramatic decline in daily fatalities in recent weeks as the country brings the outbreak under control.

Spain was at one point one of the worst affected countries by the pandemic but it has now has started to ease lockdown restrictions. However, with people relaxing after months shut up inside, police have intervened in a series of incidents at parties, funerals and other social gatherings at which restrictions were broken.

The prime minister has paid fines totalling about €620 for smoking indoors and holding a meeting in a government building where several cabinet ministers and other participants did not follow social distancing rules.

In a photograph published in Romanian media, prime minister Ludovic Orban and others can be seen smoking with food and bottles of alcohol on a table. No one in the photo wore a mask or maintained the required spacing.

Mr Orban told the Mediafax news agency that the picture was taken on May 25th, his birthday. The foreign minister and economy minister of Romania were among those attending.

Officials have reported 39 new cases of the virus, most of them in the densely populated Seoul area where scores of infections have been linked to warehouse workers.

The latest figures from the Centres for Disease Control and Prevention brought national totals to 11,441 confirmed cases and 269 deaths.

Its director Jeong Eun-kyeong said on Friday that at least 102 infections have been linked to workers at a massive warehouse operated by Coupang, a local e-commerce giant that has seen orders spike during the crisis.

The company has been criticised for failing to implement proper preventive measures and enforce distance between employees, with the virus discovered on safety helmets, laptops, keyboards and other equipment they share. The resurgence in infections has alarmed officials as millions of children have been returning to school nationwide.

China has reported four new confirmed cases of Covid-19, all brought in from outside the country, but no further deaths.

Just 63 people remain in treatment and another 401 are in isolation and being monitoring after showing signs of having the virus, or after testing positive without showing any symptoms.

China has reported a total of 4,634 deaths among 82,999 cases since the virus was first detected in the central industrial city of Wuhan.

With virtually everyone wearing masks in public, most offices, shops and restaurants have reopened.

But the economic fallout from months of lockdown in most of the country has left millions unemployed and, combined with a worsening trade dispute with the US and drop in global demand, it remains unclear how many jobs will return.

The country’s Civil Aviation Authority announced international flights can resume in and out of Pakistan — even as it recorded its single highest overnight death toll of 78 and the number of confirmed Covid-19 cases soared beyond 66,000.

As of Saturday, Pakistan had recorded 1,395 deaths from the virus since mid-March and daily counts of new cases showed a jump of nearly 2,500.

Pakistan has eased most of its lockdown measures and earlier this month the Supreme Court even ordered shopping centres to reopen. That came despite pleas from the country’s medical profession and dire warnings of more deaths.

Moscow has recorded nearly 9,000 new cases of coronavirus, roughly consistent with the increases reported over the past two weeks.

The national coronavirus taskforce said on Saturday that 4,555 Russians have died of Covid-19 and 396,575 infections have been confirmed overall.

The relatively low mortality rate compared with other countries has prompted scepticism domestically and abroad. In a bid to dispel suspicions that authorities are trying to lower the death toll for political reasons, deputy prime minister Tatyana Golikova explained on Friday that Russia’s count contains only those confirmed to have died of the infection, but she also gave figures for people who tested positive for the virus but died of other causes.

If all categories are counted as Covid-19 deaths, the nation’s total death toll for April would stand at 2,713 — nearly 60 per cent more than the previously announced number.

All citizens have been ordered to wear facemasks in public, in private transport, and inside government offices as authorities ease the partial lockdown imposed during the Muslim holiday of Eid el-Fitr.

Prime Minister Mustafa Madbouly said anyone violating the rules will be fined. A nationwide curfew from 8pm to 6am is in place for another two weeks.

Egypt has seen a jump of daily reported infections in the past week, with a total of 879 deaths among 22,082 confirmed cases.

The country of 100 million people has the highest announced deaths from Covid-19 in the Arab world.

Foreign minister Luigi Di Maio has warned the European Union will “collapse” if governments treat Italians as outcasts and “black list” the nation during the summer tourism season.

In a blistering Facebook message posted on Saturday after Greece excluded Italians — as well as people from Spain, Britain and other countries with high infection rates — from a list of foreign tourists it will welcome this summer.

He warned: “If you act differently and dislocated, the EU spirit will be lost. And Europe will collapse.”

Mr Di Maio also said he will be travelling to Germany, Slovenia and Greece in the coming week to make the case that Italy is ready to receive foreign tourists.

Tourism and its related industries account for some 13 per cent of Italy’s GDP. — AP/Reuters

1 Coronavirus: Parents of new babies to get three extra weeks’ leave
2 Covid-19: 200 to 250 people arriving in Ireland from US daily - Coveney
3 US passengers fly into Dublin: ‘I’m here for six days. I guess I’ll have to stay inside’
4 People with foreign accents should not be ‘assumed’ tourists - NPHET
5 Maureen Dowd: Biden has his limitations but he’s no Trump
Real news has value SUBSCRIBE