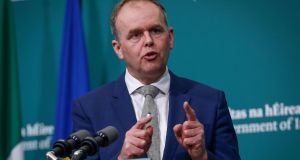 Taoiseach Leo Varadkar confirmed yesterday that primary and secondary schools would reopen at the end of August.

Speaking to reporters, he said the Government realised it was not a “no-risk scenario but we know it’s a low-risk scenario”.

While it may not be possible for every pupil to attend every school for the whole day every day at the start of school terms, he said, the intention was to reopen schools as “fully as possible”.

Meanwhile, Department of Education officials are considering asking schools to keep groups of students or classes apart from each other at all times as a way of getting around social-distancing requirements when they reopen in late August.

It is one option the department is examining as a way of ensuring as many students as possible can attend classes full-time, according to well-placed sources.

Minister for Education Joe McHugh warned earlier this week all students would not be able to attend school even if social-distancing requirements were to be reduced from two metres to one. He said he would not accept a “half-return” with students attending school only some of the week.

The option of allowing groups or classes to learn in a relatively normal classroom environment is likely to be attractive to policymakers.

Ireland has among the most overcrowded classes in Europe and will face major capacity problems if social-distancing rules are implemented. There is also a shortage of qualified teachers.

Mr McHugh’s officials are examining the experiences of countries such as Germany, France, Denmark and Greece in reopening their schools, which will feed into a plan for Irish schools that will be drawn up within the next fortnight.

The idea of dividing students in pods or groups was discussed during a department meeting with primary school stakeholders earlier this week.

The Irish National Teachers’ Organisation suggested the idea of “pods” of four children grouped together in a classroom.

Another issue explored in the talks were challenges for special classes and special schools, especially where children have underlying health conditions.

It is also understood the department is exploring the idea of a “tapered curriculum” when schools return.

This involves adapting the school curriculum in light of restrictions linked to the pandemic. Some elements of the junior cycle are also being curtailed, with incoming third-year students now required to complete a single classroom-based assessment in most subjects, rather than two.

Opposition parties, meanwhile, have criticised the Government over what they said were “mixed messages” over plans to reopen schools.