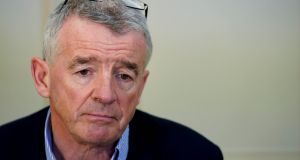 Ryanair chief executive Michael O’Leary has predicted Ireland’s quarantine of incoming passengers will be scrapped within two weeks as he rounded on the Government for following scientific advice that differs with several European countries.

Mr O’Leary accused the Government of mishandling the reopening of the economy, saying measures are being made up as they go along.

His comments follow remarks by the Taoiseach to Fine Gael councillors that the 14-day quarantine policy could be reconsidered in the coming months.

“When Leo Varadkar says, oh we’ll review the lifting of the quarantine but in months not weeks, you’re talking rubbish,” Mr O’Leary said.

Mr O’Leary said chief medical officer Tony Holohan and Minister for Health Simon Harris would be crushed under a “stampede” of Irish families rushing to go on foreign holidays this summer.

“They are booking in their thousands already over the last 10 days,” he said. “All they want to know is when can they fly and nobody’s worried about the Irish or the UK quarantine.”

He predicted the policy would be scrapped, possibly quietly, within two weeks and around the same time the UK ends its version.

“When all of the medical experts across Europe, in Italy, Spain, Greece, Portugal, this week Germany, France, are all saying it’s safe to fly, no quarantine necessary, all quarantines abandoned, why is Ireland going ‘we need a quarantine’?”

‘Science this, science that’

Mr O’Leary was also critical of the policies of the National Public Health Emergency Team under Dr Holohan and of the lack of media scrutiny.

“When did he suddenly become infallible? He’s not the bloody pope. And he keeps parroting on about the science this and the science that. ”

Asked about Mr O’Leary’s criticism of the quarantine policy , Dr Holohan said he was not surprised given his role.

“We do hope to be in a situation when the disease conditions both here and other countries are such that we’ll be able to resume airline travel, but we don’t think it’s in the near term.”