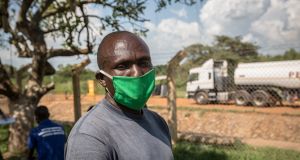 Truck driver Naliku Musa waits for coronavirus test results at the border between Uganda and South Sudan, which is closed to everything except cargo trucks. Photograph: Sally Hayden

The 33-year-old began transporting his cargo of maize before the coronavirus pandemic broke out. In South Sudan, he says, people aren’t concerned about the pandemic.

“For them they don’t follow [social distancing measures],” he says.

In Uganda, it’s a different story. The country’s borders have been closed since March to everyone except those moving cargo. Testing of drivers is mandatory, and delays are long, turning the border into a potential tinderbox of infection. Musa says he has waited 1½ weeks to be tested, and three days so far for the result.

When a sample is finally taken, it has to be sent 430km to Kampala for testing. One vehicle travels down the length of the country every day, and another brings the results back up.

While drivers sleep in their trucks, in a queue that stretches back 2,000 vehicles, they mix freely, visiting local restaurants. Some sleep with prostitutes.

“As you move along the road you can see the girls . . . waiting for truck drivers,” says Patrick Louislamo, the Ugandan health ministry logistics support officer at Elegu. Like other staff at the border point, he hasn’t seen his family in two months. Most of his colleagues stay in tented accommodation nearby.

Musa isn’t concerned about the disease, but he frets the money he will be paid for his work isn’t worth all this sitting around; he earns just 300,000 Ugandan shillings (about €71) a month. Nevertheless, “I will keep going because this is my work,” the father of five says, his voice quiet under his bright green mask.

Nearby are cardboard signs from a demonstration drivers have held in previous days. “We want our rights”, “We also have family” and “We have been tested severely”, they read.

Scepticism about Covid-19 is prevalent among those waiting. “God is the one who knows the date you will die. If he says you will die, you die,” remarks one driver, who refuses to wear a mask as he wanders under the trees and into an airy tent.

After months when relatively few coronavirus cases were registered across Africa, the Elegu border point has suddenly become a hotspot. On Wednesday, 21 drivers there tested positive for Covid-19. On Thursday, 20 more tested positive.

Ugandan officials say this is evidence of what is happening in South Sudan, accusing the country’s leaders of inaction. This is perhaps not surprising, given that many of South Sudan’s top politicians have coronavirus.

South Sudan has nearly 1,000 confirmed cases of Covid-19, and 10 deaths. The first cases were announced just last month, and the fact that the initial four were all United Nations staff members led to a rush of online threats against foreigners. Since then, the figure has surged.

“The numbers are unfortunately climbing fast,” said Sinead Walsh, EU ambassador to South Sudan. “Some days in the past week approximately half of the samples tested were positive for Covid-19. It is very worrying.”

Ms Walsh said South Sudan – a landlocked central-east African country of roughly 12 million – took early and proactive measures to slow the spread of the virus before there were any confirmed cases, but many of these measures were lifted on May 7th. “Restaurants and bars were allowed to open, for example . . . This loosening of the measures is causing confusion for people.”

South Sudan is the world’s youngest country. When independence from the Islamic north of Sudan was declared in 2011, sceptics labelled it the first “pre-failed state” – a reflection of how incredibly low were all its development markers. Young girls, for example, were more likely to die in childbirth than finish school.

Despite an influx of investment and aid, celebrations were short-lived. War erupted at the end of 2013 when the president, Salva Kiir, accused his vice-president, Riek Machar, of planning a coup. More than 400,000 people were killed in the ensuing conflict. Millions fled. There are still almost 900,000 South Sudanese refugees in Uganda, 820,000 in Sudan and 340,000 in Ethiopia.

A peace deal was eventually agreed and, in February, Machar flew back to the capital city, Juba, to reclaim his post as vice-president. Machar cemented his position in government when he was put in charge of the coronavirus response.

However, on May 18th, it was announced on Machar’s Facebook page that the 67-year-old had tested positive for coronavirus, along with a number of his bodyguards and staff. Ten government ministers also had the virus. On Wednesday, it became public that the replacement head of the coronavirus task force, Hussein Abdelbagi Akol, had the disease too.

Rumours spread that Kiir was also infected, something a Ugandan interior ministry source told The Irish Times they believed to be true, but that Kiir himself has denied. The 68-year-old president wrote to Machar to encourage him to muster “courage and zeal to win the battle”.

“We know that the pandemic is relentless but we will pull through,” he said.

Still, peace remains fragile in South Sudan. Hundreds of people, including three aid workers, were killed in inter-communal violence in the eastern Jonglei state this month. With the pandemic spreading, activists, civilians and neighbouring governments are concerned that the country’s future may be in danger.

“The peace deal is at serious risk,” said Amanya Joseph, a South Sudanese justice activist. “Currently the implementation has completely come to a stop because most of the key stakeholders are infected and Covid-19 positive. The government is even not functioning.”

A plan to create a unified military force can’t go ahead, given the defence minister Angelina Teny, Machar’s wife, is isolating with Covid-19. The appointment of state governors is also pending.

However, the biggest concern voiced by everyone who spoke to The Irish Times is what would happen if either of the two “key players” – Kiir and Machar – were to die from the disease.

At a press conference in northern Uganda last week, Jacob Siminyu, a spokesperson for Uganda’s Ministry of Internal Affairs, said the death of either man could lead his supporters to blame the other.

They look at it as retribution for what these leaders did, taking the country back to war

“We are taking caution because that country has not been very stable until recently, and if one of the presidents dies there, somehow there might be some confusion,” Siminyu said, while also accusing South Sudanese authorities of “doing nothing” to stop the spread of coronavirus.

Political chaos and a leadership crisis would be “a threat to the whole country,” said Joseph, the justice activist, who is campaigning for the victims of South Sudan’s conflict to be remembered.

Some South Sudanese civilians, he said, were celebrating the politicians’ diagnoses. “They look at it as retribution for what these leaders did, taking the country back to war and corrupting the resources of the country, not investing in health facilities.”

While wealthy politicians are accustomed to flying out of South Sudan when they need healthcare, global restrictions have put a stop to that this time, a development civilians say is a punishment and reckoning for their leaders.

“That is no man’s land,” says Bukenya John Rogers, a stout Ugandan official in charge of contact tracing, back on the Elegu border, gesturing at a metal structure about 50m away, beyond a line of towering trucks, which marks South Sudan.

“We don’t know what happens that side. We don’t go there because that is a different country. They control their part and we control our part,” Rogers says. “The relationship isn’t that good, because those people spent so many years in the wars. They don’t even think that Covid can hurt them because they spent so much time with guns and bombs.”