London Letter: Impatience is in the air, with many businesses eager to open up again 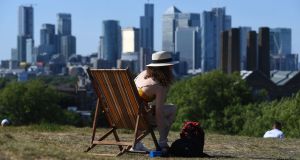 It was just before eight in the morning and like most people in London these days, the man queuing in front of me outside the bakery was complaining about the government. As a businessman, he could identify every one of the failures of project management behind the bungling of the coronavirus response and the delay in testing, tracking and tracing.

“Look at South Korea. Look at Germany, ” he was saying.

“Look out behind you,” I said as a builder walked past with a length of timber over his shoulder.

We turned to talking about the bakery, a shrine to sourdough in the heart of Belgravia in which every customer agrees it is a privilege to be allowed to shop. The interior is cold, dark and silent with all the joviality of a 19th century French peasant’s dwelling the day after most of his children have died.

Along a shelf on the side wall stand the giant, two-kilo sourdough loaves the size of basketballs and below them a handful of smaller rye and walnut loaves. A sorrowful young woman in a brown pinafore and beige apron keeps watch behind a counter laden with straw baskets, one of them filled with the turd-shaped sourdough rolls that nourished the impoverished artists of Montparnasse in the middle of the last century.

The shop is so small that social distancing allows only one customer inside at a time and before the businessman went inside, he told me he never accepted a loaf from the shelf.

“I tell them to go in and get me one from the back. They don’t like it,” he said.

I didn’t like his attitude and catching the eye of the woman behind me, I recognised another true believer and could see she didn’t like it either. When he was gone, we both gazed at a plate of brown raisin rolls in the dingy shop window.

The bakery remained open throughout the lockdown while everything around it was closed but there have been signs of life in the neighbourhood this week.

My favourite French restaurant is offering a reduced menu for takeaway, ingeniously conveying the chilly indifference that is the house style by charging more for each dish than when they served it inside. You have to put in your order 24 hours in advance and everything is cold when you pick it up and has to be reheated at home.

The dry cleaners which had been opening only on Saturdays is now open every day as more people return to work. The long queues outside supermarkets have all but disappeared and the sound of traffic has started to drown out the birdsong again.

The man who sells coffee and sandwiches from the green wooden kiosk on the square near the Tube station says the builders are busier than ever and they’re keeping him going.

“The government is driving us down, down, down. The country’s got to get moving,” he said.

The London Underground remains empty most of the time and station announcements urge passengers not to take the Tube but to walk or cycle instead. But on a couple of days this week, there were no recorded cases of coronavirus in London and many businesses in the capital are eager to open up again.

Their impatience is shared by much of the Conservative parliamentary party but polls show that the public is wary of easing the lockdown too soon. Nowhere are the divisions deeper than over whether to reopen schools for some children on June 1st, as Boris Johnson has said he wants to.

The government’s plan is for the equivalent of junior infants, senior infants and fifth class in primary school to go back first, with third year and fifth year in secondary school to follow soon afterwards. But YouGov found this week that the British public oppose the plan by 50 per cent to 36 per cent. 18-24 year-olds are especially critical of the approach, with 56 per cent opposing it compared with 42 per cent among those over 65.

Data collected by Google for Public Health England has found, however, that the number of people visiting parks is approaching pre-lockdown levels and footfall around transit hubs and workplaces has been rising gradually.

Despite what they tell the pollsters, British people are apparently either voting with their feet in favour of a return to work or finding themselves unable to manage without it.