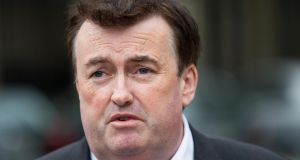 Colm Brophy: said the economic damage to the economy “and to the wellbeing of many individuals and businesses will be deep and possibly prolonged”. Photograph: Tom Honan

A prominent Fine Gael TD has called for a new State body to be established, aside from the National Health Emergency Team, to help lead economic recovery as the country emerges from the Covid-19 crisis.

Colm Brophy, chairman of the budgetary oversight committee in the last Dáil, said there is now capacity in the public health system to manage any future outbreaks of coronavirus.

However, he said that the economic damage to the economy “and to the wellbeing of many individuals and businesses will be deep and possibly prolonged”.

While NPHET will maintain preparedness from a public health point of view, he called for a “separate broad based national recovery taskforce to identify a pathway to economic and social recovery”.

“Easing the lockdown will be extremely complex and subject to intense debate and competing interests. The provision of childcare and the reopening of schools are already contentious issues. The cost to the State of the pandemic is already estimated to reach €30 billion for 2020; that is equivalent to €6,000 for ever person in the state. This money will be mainly borrowed money.”

Meanwhile on Friday the Government announced that mothers returning to work from maternity leave are now eligible for a scheme in which the wages of certain workers affected by the coronavirus pandemic are subsidised by the State.

Minister for Finance Paschal Donohoe has announced that he has tweaked the temporary wage subsidy scheme (TWSS), which covers up to 85 per cent of an employee’s wages up to €410 per week, to fix an anomaly that emerged that excluded returning mothers and people on parental leave.

The change will be legislated for later in the year “as part of the usual Finance Bill 2020 process”. In the meantime, he said, Revenue has agreed to implement it and it will be backdated to March 26th.

The anomaly arose because the scheme, brought in to encourage employers to keep staff on their books who might otherwise have been laid off, required qualifying workers to have been on the payroll of their employer on February 29th, or to have been been paid in either January or February.

Mothers on maternity leave who subsequently returned to the workforce did not qualify under the old criteria. This lead to heavy criticism of the Government from women’s advocacy groups and opposition politicians, who said mothers or parents who adopted were being discriminated against.

“The Cabinet today agreed an important change to the scheme to ensure that workers are not denied access to us because of the personal circumstances, relating to maternity leave,” Mr Donohoe said.

“The Government is making this important change, because we want to ensure that citizens are not denied access to the scheme, because of their personal circumstances,” he said.

“I am satisfied that this change addresses the anomaly and ensures appropriate operation of the TWSS in recognition of the unique circumstances applying to those returning to work after a period of maternity or adoptive leave.”

The latest figures from Revenue, two weeks ago, showed that €936 million had already been paid out by the State under the scheme.