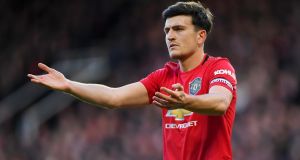 Manchester United captain Harry Maguire is one of the administrators of the fund. Photograph: Laurence Griffiths/Getty

The 20 Premier League captains have reached agreement on the formation of a charitable fund – based on player contributions and called #PlayersTogether – to help those most closely involved in tackling the coronavirus pandemic. It is hoped they will raise in excess of £4 million (€4.6m).

There has long been the will among the league’s players to support the National Health Service financially – together with other key areas of need – and, after a good deal of time and coordination in bringing the vision together, they have partnered with NHS Charities Together [NHSCT]in order to do so.

A player statement read: “The contributions that this initiative will generate will help NHSCT quickly grant funds to the front line to support in a number of ways, including to help enhance the wellbeing of NHS staff, volunteers and patients impacted by Covid-19.”

Acting as representatives for their squads, the captains have spent recent days in conference calls – the latest of which began at midday on Wednesday – and they had a variety of issues to confront.

One of them was how to pitch the level of the contributions from each squad, with everybody mindful that some earn rather more than others, and to ensure that those who cannot give as much are not made to look less generous. The proposed solution is for each squad’s donation to arrive anonymously into the central fund, which will be distributed locally and nationally.

Unsurprisingly, the players wanted their money to work in hospitals near to their clubs, although there was the added complication of overseas players wanting to do their bit for their home countries. Distribution percentages from the fund were a key topic.

Each captain has tried – after discussions with teammates – to fix a base percentage of their monthly pay packets to give, although if anybody can contribute more then that would be gratefully received. The talks initially targeted players’ take-home for April and May.

Players at some clubs are under pressure to accept pay cuts from their chairmen, with Daniel Levy at Tottenham, for example, having said he wants members of his squad to do “their bit for the football ecosystem” in the face of an unprecedented crisis.

But the Guardian understands that whereas all squads will gladly contribute to the fund overseen by the captains, which allows for greater control over where the money will go, some will not accept pay reductions.

In a further charity initiative by players, Common Goal has announced the launch of its Covid-19 response fund. It aims to help tackle the pandemic’s immediate effects among young and vulnerable people in deprived communities, before ensuring support continues beyond the initial response.

Common Goal – a global project whose members include Juan Mata, Jürgen Klopp and Megan Rapinoe – is a movement through which footballers and coaches pledge 1 per cent of their earnings to organisations that drive social change. It works with community bodies in 90 countries.

“To overcome coronavirus, and the other challenges facing humanity, we need to coordinate individual efforts and work together as a team,” said Mata, who launched Common Goal in 2017. “I’m urging not only my Common Goal teammates, but also all other players and football leaders from around the world, to unite and help tackle this crisis.” The fund is also open to people outside the football industry. - Guardian