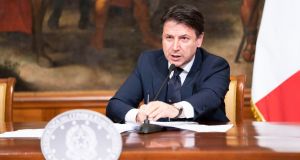 Italian prime minister Giuseppe Conte: “We are not demanding that Germany and Holland should pay our debts.” Photograph: EPA

Euro zone finance ministers gather again on Thursday to try to secure compromise on a rescue plan for economies that have been pummelled by the coronavirus pandemic.

The meeting comes against the background of French threats to proceed with a smaller group of member states to issue debts – or coronabonds – jointly if no consensus is reached within the euro group.

“Let’s be very clear: that’s not our wish,” a French presidency official told reporters on Wednesday when asked about the plan. “It’s better to do this collectively in a euro zone format. But the question is posed for the future about whether a certain number of things can be done in a smaller format in terms of solidarity, even issuance.”

The 19 members of the single currency failed to reach agreement in talks that began on Tuesday and stretched into Wednesday morning due to a deep division over how to finance the response to the crisis.

The two poles of disagreement are represented by Italy and the Netherlands.

Italy, supported by Spain and seven other countries including Ireland, has asked for the issuance of joint debt to fund the recovery, which, it argues, would bring down borrowing costs and be a vital demonstration of the EU solidarity needed to address the emergency.

The Netherlands is staunchly against becoming the guarantor of any other country’s debt, driven by strong domestic opposition to what is seen by some as giving handouts to profligate southern states that have been enjoying the good life.

A proposal that countries in economic trouble could seek loans from the EU bailout fund, the European Stability Mechanism, came close to winning consensus. However, it failed because the Netherlands, the last holdout, insisted that loans for anything other than medical spending must come with a requirement to balance the national books, according to a French presidency official.

For Italy such conditions are politically toxic domestically, raising the prospect of having to impose rounds of austerity in an attempt to cut debt as happened during the bailout years.

A steep recession is forecast across the EU, and the profound damage to the weaker economies that have been hardest hit by the pandemic is feared to risk triggering a debt crisis in the euro zone like that seen in the wake of the 2008 financial crisis.

Officials have warned that nothing less than the future of the bloc is at risk due to the bitterness of the debate and divisions over how to resolve deep structural problems at the heart of the single currency.

Joint issuance is also opposed by Germany, Finland and Austria, but the Netherlands has assumed the role of the most vocal opponent, and there are indications of a shift in domestic German political sentiment where prominent economists have called for eurobonds.

“Otherwise we have to write off Europe and everyone does their own thing. We cannot stand there at the end and say: operation successful, patient [Europe] dead.

“Germany has no benefit when Europe sinks into recession. We have to develop finance political instruments and create an ability to react. We are not demanding that Germany and Holland should pay our debts. ”

Some officials are doubtful that a deal can be reached by the finance ministers, and expect that the issue will be handed over for discussion between government leaders, the latest in a list of issues that need resolution, including the EU’s budget.