As lockdown conditions being to ease, countries must remain on alert, warns WHO 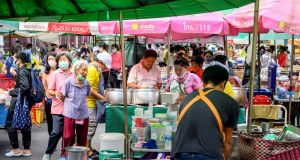 People shop at an open-air market outside Lumpini Park, which was reopened after the Thai government relaxed measures to combat the spread of the coronavirus, in Bangkok on May 3rd, 2020. Photograph: Mladen Antonov/AFP via Getty Images

All countries must remain “on alert” to the possibility of additional transmission of coronavirus, a World Health Organisation (WHO) expert has said.

Maria Van Kerkhove, WHO technical lead on the illness, also known as Covid-19, said that many people remain susceptible to the virus, even where transmission has been suppressed.

More than 3.44 million people have been reported to be infected by the novel coronavirus globally and 243,015 have died, according to a Reuters tally, as of 2am GMT (3am Irish time) on Sunday.

Asked on the BBC’s Andrew Marr programme if a second wave of infection could be likely in countries that have started to ease their lockdowns, Ms Van Kerkhove said: “It’s certainly possible. What we’re seeing in a number of countries that have been successful in suppressing transmission is that many more people remain susceptible.

“And what we’re seeing in countries like Singapore where they’ve seen almost like a second wave, essentially what it is is actually outbreaks that are happening in expat dormitories and so the virus has found a place where it can take hold and it can resurge again.

“So all countries must remain on alert for the possibility of additional transmission even if they have been successful in suppressing transmission in the first round.”

France has announced new quarantine measures in a bid to slow the spread of coronavirus while Italy prepared to ease up on its lockdown measures from next week.

Madrid and Catalonia remain the two worst affected regions, with 8,332 and 5,185 fatalities respectively.

The declining death rate is an encouraging sign for Spain, which on Saturday took a large step towards unwinding its stiff lockdown by allowing adults to exercise outdoors for the first time in seven weeks.

Some 1,000 police officers were dispatched in New York over the weekend to enforce social distancing and a ban on congregating in public spaces as sunny weather brought out more people.

Officers set out on foot, bicycles and cars to break up crowds and remind those enjoying the weather of public health restrictions requiring they keep six feet away from others.

The spread of the coronavirus in India’s notoriously crowded prisons has prompted authorities to impose jail lockdowns and release thousands of pre-trial detainees on parole, as health experts worry the cramped facilities are serving as breeding grounds for the disease.

Although there are no official numbers on how many inmates have been infected by the virus, India’s correction facilities are slowly recording more infections and have temporarily banned visitors.

Meanwhile, the Indian Air Force on Sunday conducted flypasts and showered flower petals on hospitals across different cities including the national capital of New Delhi as part of the Armed Forces’ efforts to thank doctors, nurses and police personnel who have been at the forefront of the country’s battle against the pandemic.

Health minister Olivier Veran said people travelling into France, including French citizens returning home, will be placed in a 14-day quarantine as part of new extended proposals to limit the spread of the new coronavirus.

Entering France is currently restricted to essential travel and a travel certificate is required for everyone entering the country. The proposals are being sent to Parliament next week.

The number of beds treating Covid-19 patients continued to decline as Italy prepared to ease its strict lockdown measures on Monday.

The Civil Protection Agency said there were 212 fewer people hospitalised with the virus and 39 fewer in intensive care in the past 24 hours, numbers that have been consistently easing in recent weeks.

That has given authorities confidence to be able to cope with any new spike in cases as more businesses reopen and individuals are allowed more freedom to move around their towns and cities of residence.

Chinese residents are flocking to tourist sites, many newly reopened, during a five-day holiday that runs until Tuesday.

Nearly 1.7 million people visited Beijing parks on the first two days of the holiday and Shanghai’s main tourist spots welcomed more than a million visitors, according to Chinese media reports.

The surge comes after a relaxation of domestic travel restrictions as the coronavirus outbreak slows in mainland China and the government tries to reboot the economy. China reported just three new cases in the last two days.

Residents of the Thai capital Bangkok strolled in its parks, booked haircuts and stocked up on beer as they enjoyed their first day of eased restrictions that were imposed weeks ago to combat the spread of Covid-19.

The top perk in a city famous for its eateries may have been the reopening of restaurants. But it was not clear how many were actually serving seated customers again, since guidelines would make it hard for many to turn a profit.

There was also a partial lifting on the sale of beer and other alcoholic drinks that will allow takeaway purchases, even while bars remain closed.–Agencies