Coronavirus: US may seek damages from China, Trump suggests

US says virus ‘could have been stopped at source’; Beijing accused of ‘profiteering’ from pandemic 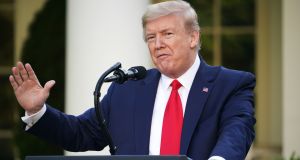 US president Donald Trump takes questions from reporters during a news conference on the coronavirus in the Rose Garden of the White House in Washington, on Monday. Photograph: Mandel Ngan/AFP/Getty Images

Donald Trump has renewed his attacks on China, saying his administration was conducting “serious investigations” into Beijing’s handling of the coronavirus outbreak and suggesting he would seek damages for the US.

The US president had stopped giving press briefings after his advisers reportedly warned him that his marathon news conferences, including his widely-ridiculed comments about disinfectant as a possible treatment for Covid-19 - were hurting his re-election campaign.

The pause only lasted the weekend however. On Monday morning the White House announced that the day’s briefing was cancelled, only to reverse the decision hours later.

At the briefing Mr Trump launched another forthright attack on China, saying there were “a lot of ways you can hold them accountable” for the pandemic.

The president refused to take responsibility for people who acted upon his unsafe suggestion last week that injecting disinfectant could help patients with Covid-19.

Earlier in the day the White House trade adviser, Peter Navarro, accused Beijing of sending low-quality and even counterfeit coronavirus antibody testing kits to the United States and of “profiteering” from the pandemic and selling “fake tests and counterfeit tests”.

After a series of controversial shipments, China’s government introduced strict rules last month which required all medical equipment and testing kits to be approved by the national medical products administration and registered before they were exported. However, after some suppliers reportedly complained it was too difficult to get the domestic license required, the rules were scaled back on the weekend, with exports now only needing to meet the importing country’s standard.

US criticism of China has intensified over the past week. Over the weekend Politico published details of a 57-page Republican party attack memo, which advised candidate to aggressively target Beijing in their public remarks on the pandemic.

China has reacted strongly, denying any cover-up over the virus. An editorial in the state-backed Global Times on Monday said “China’s achievement in the fight against Covid-19 is way better than that of the US”.

“It is the urgent political need of the Republican-led government to pass the buck to China for its own failure to contain the outbreak, so as to win the upcoming election,” the editorial said.

“This is a life-and-death matter, so it would spare no effort to smear China and mobilise all possible public opinion forces to do so to cover its selfishness.”

It said the US had a few followers “like Australia”, but these countries had barely any influence over China. On Tuesday the spokeswoman for China’s ministry of foreign affairs, Hua Chunying, called for the US to “stop playing the political game”.– Guardian