Call for ‘precarious’ contracts of frontline nurses to be clarified 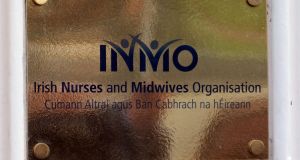 An INMO spokesman said the organisation had not known nurses returning to the frontline in recent weeks, under the On Call for Ireland drive, were agency workers on short-term contracts. Photograph: Nick Bradshaw / The Irish Times

The Irish Nurses and Midwives Organisation (INMO) is seeking “urgent clarification” on the employment rights of hundreds of nurses recruited to help in the Covid-19 pandemic, after it emerged none recruited under the Be On Call for Ireland drive, is working directly for the HSE.

The executive confirmed on Friday many new recruits to the frontline in recent weeks are agency staff on short-term contracts. An INMO spokesman said the organisation had been aware of this. “We are concerned and are seeking urgent clarification of what’s going on,” he said but would not comment further.

A nurse, working in a Dublin hospital since last week, was “really disappointed” when she got her contract of employment on Tuesday, that it was not with the HSE. It was “precarious and short-term”, she said.

She had responded to the HSE’s Be On Call For Ireland campaign after almost five years out of nursing, “because morally it was the right thing to do”.

Her contract, dated April 28th and seen by The Irish Times, is for three months and states she will not be entitled to paid sick leave or compassionate leave. She has an ill, elderly mother.

She has a “Specified Purpose Contract of Employment between CPL Healthcare Limited” and her. The HSE is described as “the client”.

Her employment “with the company…shall be for the purpose of working to help the client during this emergency period as a result of the outbreak of Covid-19. The employment under the terms of this contract will terminate at the end of the emergency period of the Covid-19”.

“It is anticipated that the duration of the assignment will be approximately three months,” though this may change, it says.

“Unless otherwise agreed, you will not be entitled to payment either from the company or the client in respect of time not spent on assignment, whether as a result of illness or absence for any other reason with the exception of annual leave or public holidays.”

It states: “From time to time, you may be required to change location(s)/wards at which you provide the services subject to the client’s requirements.”

The young woman, who qualified as a nurse in 2012 during the HSE recruitment embargo, worked as an agency nurse for three years but left as the cost of childcare made working unviable.

“I really was under the impression the HSE was recruiting and employing extra nurses in a new single-tier health service.” She cites statements in recent weeks by Minister for Health Simon Harris, and chief executive of the HSE Paul Reid, in which both said the HSE wanted to hire as many health professionals as possible.

She is concerned about being moved between hospitals, saying this is “unsafe and unfair on staff in those hospitals to have to re-orientate agency workers repeatedly”.

“I really feel for all those nurses and doctors who were asked to come home to work in the Irish public health service and all they get are these precarious, short-term contracts.”

Richard Boyd Barrett, TD (People Before Profit) raised the agency employment issue at Taoiseach’s questions on Thursday, asking why the new workers had been “given the worst possible contracts”.

Taoiseach Leo Varadkar said: “That is new information to me so I will have to check up on it.”

A HSE spokeswoman said: “The Be on Call for Ireland campaign is an initiative supported by CPL Recruitment agency.

“Due to the strain on existing HSE resources to meet the COVID- 19 challenge, the HSE is being supported by an employment agency in increasing the available workforce for a short term period. The contract of employment will be to an employment agency and will not be a HSE contract at this point. Employment contracts may be reviewed at a later date.

“Be on Call for Ireland appointees are paid the same salaries as HSE employees,” she said adding anyone who becomes ill with Covid-19 is entitled to the Covid illness benefit from the Department of Social Protection.

CPL Healthcare did not respond to requests for a comment, made by email and phone.