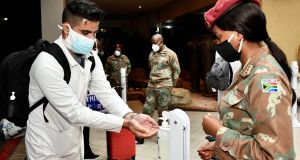 Cuban health workers arriving at the Waterkloof air force base in Pretoria on Monday. Photograph: Elmond Jiyane/GCIS/AFP via Getty Images

Hundreds of Cuban medical professionals have arrived in South Africa, which will begin to ease its Covid-19 lockdown from this Friday, to bolster the country’s efforts to slow the spread of the disease.

A total of 216 healthcare specialists arrived at the Waterkloof air force base in Pretoria from Cuba early on Monday and, after completing 14 days in quarantine, they will be deployed around the country by the department of health.

The plane that brought Cuba’s “medical brigade” had initially delivered a consignment of medical supplies donated by South Africa to the Caribbean nation for use in its fight against Covid-19.

The medical mission is expected to strengthen an already close relationship between Cuba and South Africa, which was forged during the fight to end apartheid.

Cuba’s government has said thousands of its soldiers lost their lives in southern Angola in the 1970s and 1980s where they defeated proxy forces dispatched by South Africa’s then white minority government to halt the spread of communism.

Earlier this month, health minister Zweli Mkhize said the Cuban health workers would be able to help contain community transmission of Covid-19, given it had significant experience in this area.

“The advantage of Cuba is its community and district health model is one we would like to use because it works in instances where you reach out to as many communities as possible and ensure there is good [coverage] at community level,” Mr Mkhize said.

Up to 28,000 community health workers in South Africa have begun screening millions of people for Covid-19 in a bid to contain its spread, especially among the country’s many socially vulnerable communities.

Health department director general Dr Anban Pillay told MPs last Friday that testing rates were rapidly increasing, and that officials were seeing a Covid-19 positivity rate of about 3 per cent.

This “suggests the community level of spread is still low relative to what it is in other environments”, he added.

As of Monday, South Africa had recorded 4,793 Covid-19-related cases and 90 deaths. A total of 178,470 Covid-19 tests have been conducted so far, according to the National Institute of Communicable Diseases.

Cuba’s medical work overseas has been held up by its communist government as a symbol of global solidarity. The 216 medics sent to South Africa are among 1,200 healthcare workers Cuba has dispatched to 22 countries that have requested its help to deal with Covid-19.