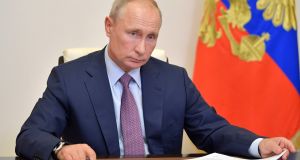 Russian president Vladimir Putin: “We need internal stability and time to strengthen the country and all its institutions,” he said, admitting that Russia had “many unresolved problems”. Photograph: Alexei Druzhinin/Sputnik/AFP via Getty Images

President Vladimir Putin has thanked Russians for their “support and trust” and pledged to use it to develop and strengthen the country, after a vote decried by critics as a farce opened the door for him to remain in power until 2036.

Officials said 78 per cent of voters backed a host of constitutional amendments, including one that allows Mr Putin to run for another two six-year terms when his current mandate ends in 2024. He has already ruled Russia as president or prime minister for 20 years and would be 83 years old in 2036.

Turnout was officially 68 per cent over seven days of voting that ended on Wednesday, when partial results were announced several hours before polling stations closed, adding more fuel to the anger of critics who called the plebiscite a sham staged by the Kremlin to further tighten Mr Putin’s grip on power.

Mr Putin did not mention the “reset” of his term limits on Thursday, but focused on other changes that he said would benefit Russians.

“Here we have both the improvement of the political system and the consolidation of social guarantees. Here is the strengthening of sovereignty, territorial integrity. Finally, our spiritual, historical, moral values that bind generations together,” he said in a televised address.

The amendments ban gay marriage, enshrine a “patriotic” view of the nation’s history and outlaw the relinquishing of any territory, six years after Russia seized Crimea from Ukraine.

Mr Putin argued that Russia was still “in the formative stage” following the 1991 collapse of the Soviet Union and remained “very vulnerable in many ways”.

“We need internal stability and time to strengthen the country and all its institutions,” he said, admitting that Russia had “many unresolved problems”.

Leaders at all levels must “act quicker, more accurately and in a more organised and effective way” and “do everything to justify people’s great trust”, he added.

At the same time, Mr Putin’s allies described the vote as a huge personal victory for a man who has already ruled for longer than any other Kremlin leader since Soviet dictator Josef Stalin.

“In essence, it was de facto a triumphant referendum on trust in president Putin,” said Kremlin spokesman Dmitry Peskov.

He also denied allegations that the vote was massively rigged, insisting that it was in fact notable for its “absolute cleanness and transparency”.

Polling stations popped up in a host of unlikely and unmonitored locations, from stairwells to park benches to the boot of a car, and people were encouraged to vote with prize draws that were only open to those who had cast a ballot. There were also widespread reports of state employees being pressured to vote and people voting more than once.

Independent monitoring group Golos said the event “will go down in the history of the country as an example of an attack on the sovereignty of the people”.

Mr Putin says he has not decided whether to seek another term, but warned that failure to make that option available would lead to instability as elements of government started “looking around for possible successors”.

“The vote is an attempt to obtain a certificate of public trust that Putin can thrust in the faces of the elites, who are the real source of his worries,” Tatiana Stanovaya, non-resident scholar at the Carnegie Moscow Centre, wrote recently.

“This fear that the elites will start searching for a successor instead of working as usual explains Putin’s desire to reconfigure his relationship with them . . . The referendum was intended by Putin as a way to renew his political mandate in order to impose decisions on the elite, but its legitimacy is dubious.”