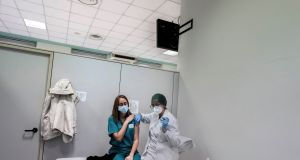 US president-elect Joe Biden will rapidly release most available coronavirus vaccine doses to protect more people, his office has said, in a reversal of Trump administration policies.

“The president-elect believes we must accelerate distribution of the vaccine while continuing to ensure the Americans who need it most get it as soon as possible,” spokesman TJ Ducklo said in a statement.

Mr Biden “supports releasing available doses immediately, and believes the government should stop holding back vaccine supply so we can get more shots in Americans’ arms now”.

The Democrat’s plan is not about cutting two-dose vaccines in half, a strategy that senior government scientists recommend against. Instead, it would accelerate shipment of first doses and use the levers of government power to provide required second doses in a timely manner.

With Covid-19 surging and vaccinations off to a slow start, the Trump administration has been holding back millions of doses to guarantee people can get a second shot, which provides maximum protection. It is seen as a prudent approach, since both the Pfizer-BioNTech and Moderna vaccines require a second shot after the first vaccination.

Health and human services secretary Alex Azar raised questions about Mr Biden’s plan, telling a hospital forum“ ”We’re pushing the system as much as I, as secretary, believe is ethically and legally appropriate.“

But a recent scientific analysis in the Annals of Internal Medicine journal estimated that a “flexible” approach roughly like what Mr Biden is talking about could avert an additional 23 per cent to 29 per cent of Covid-19 cases when compared to the “fixed” strategy the Trump administration is following. That is assuming a steady supply of vaccine.

After a glow of hope when the first vaccines were approved last month, the nation’s inoculation campaign has got off to a slow start. Of 21.4 million doses distributed, about 5.9 million have been administered, or just under 28 per cent, according to the Centres for Disease Control and Prevention.

Mr Biden has indicated his displeasure with the progress of vaccinations.

“I think the way it’s being done now has been very, very sad,” he said at his news conference on Friday.

The Trump administration’s Operation Warp Speed has delivered vaccines to states, he said, “but did not get them from those vials into people’s arms”, he continued. “And so it is a gigantic logistical concern of how we do that.”

He said he intends to speed up vaccinations by having the federal government deliver more vaccines and take a stronger role ensuring that they are being administered.

The American Hospital Association estimates that the nation would need to vaccinate 1.8 million people a day from January 1st to May 31st to reach the goal of having widespread immunity by the summer. That “herd immunity” would involve vaccinating at least 75 per cent of the population.

Mr Biden has set a goal of administering 100 million shots in the first 100 days of his administration. He has previously said he and vice-president elect Kamala Harris have been talking with state and local leaders about meshing the efforts of governments at all levels, including opening up vaccination centres and sending mobile vaccine units to hard-to-reach communities.

The Biden transition office said its experts believe that pushing out available vaccine as fast as possible will not create problems for people needing their second dose.

Mr Biden will make broader use of a Cold War-era law to direct private industry to supply materials for vaccine production, should that become necessary, his office said.

Australia’s health officials said on Saturday they are on high alert after cases of highly transmissible new variants of the coronavirus, discovered in Britain and South Africa, have made it into the country. Brisbane, the capital of Queensland, on Saturday went into a three-day strict lockdown after the discovery of a virulent strain of the virus that causes Covid-19, linked to Britain. A variant that emerged in South Africa was found in Sydney, Australia’s largest city, in a hotel quarantine.

The number of confirmed coronavirus cases in Germany increased by 24,694 to 1,891,581, data from the Robert Koch Institute (RKI) for infectious diseases showed on Saturday. The reported death toll rose by 1,083 to 39,878, the tally showed.