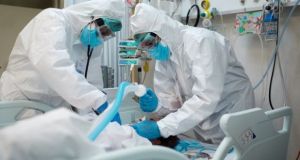 There are 400 ICU beds in the State, but access to 1,800 ventilators. File photograph: Getty Images

Hospitals are bracing themselves for the worst conditions of the pandemic so far, as the Christmas surge of Covid-19 cases hits hospitals and ICU units in the coming days.

Ministers and senior officials say next week will see the most severe test of the health service since the pandemic began as a proportion of the very high numbers of positive cases reported since Christmas will become seriously ill and require hospital care.

“Next week is it,” one minister said.

Modelling by the National Public Health Emergency Team (Nphet) shows pressures on hospitals peaking at some time between January 16th and 22nd, with sources estimating that the most likely peak will be around the 16th when Nphet expects roughly 1,300 people will be in hospital with Covid in an optimistic scenario.

Under more pessimistic projections, up to 2,200 will be in hospital at some point between then and the 22nd, though sources said there is cause for optimism that the number of new infections has peaked, meaning the load on hospitals may not be as high as feared under worst-case scenario planning.

But the number of positive cases continues to hit record levels, with 8,248 new cases reported on Friday night, and a further 20 deaths recorded. One official said he expected to see several days of “significant hospital admissions” but that the situation should “ease off” after that.

Health sources said that hospitals were preparing to use ventilators outside intensive care units if the ICUs reach capacity in the next week. The health service has about 400 ICU beds but has access to about 1,800 ventilators.

“We are preparing to provide care to people outside the ICU setting,” one official said.

There are some signs that the post-Christmas surge of infections may be abating, with the positivity rate of tests and GP referrals showing signs of easing off.

But there was further worry last night when the Chief Medical Officer Tony Holohan confirmed that three cases of the South African variant of the virus had been detected in Ireland.

The European Commission said on Friday it had doubled its order for the Pfizer/BioNTech vaccine, which will mean an additional 3.3 million doses for Ireland, though they will not arrive until later in the year.

A decision by EU regulators on the Oxford/AstraZeneca vaccine may be made by the end of this month, Irish officials believe. The drug maker is to apply for approval next week.

This vaccine, of which Ireland has ordered 3.3 million doses, is regarded by officials as a potential “game-changer” because it has no special transport requirement and would therefore be easy to administer by GPs and others in the community.

Meanwhile, delays to parts of the Leaving Certificate exams may be needed after plans to return students to school three days a week were scrapped this week.

Minister for Education Norma Foley met with teachers’ unions and education partners on Friday to discuss the impact of school closures. Education sources said Ms Foley said leeway will be given to “move timeframes” for components such as project work or oral exams due over the coming weeks, if required.

While she said she was determined to hold a traditional Leaving Cert exam in June, she said this will require a physical return to school for sixth-year students.