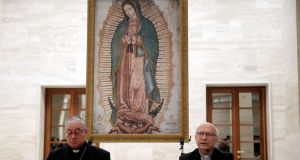 In an unprecedented move, 34 Chilean bishops said on Friday they had offered to resign en masse after attending a crisis meeting this week with Pope Francis about the cover-up of sexual abuse in their country.

It was not immediately clear if the pope would accept all or any of the resignations from the prelates, who hold all the top jobs in Chile’s Roman Catholic Church.

“We have put our positions in the hands of the Holy Father and will leave it to him to decide freely for each of us,” the bishops said in a joint statement read out by a spokesman for the churchmen, Bishop Fernando Ramos.

He said the bishops would stay in their roles until the pope had made his decision.

The scandal has devastated the credibility of the church in the once staunchly Catholic country. It has also hurt the pope’s own image because this year he strongly defended a bishop accused in the alleged cover-up before reversing his position.

The Vatican declined to comment on the timing of any decision or on the resignations themselves. A church official said it was the first time the bishops of an entire country had offered to leave their posts in such a manner.

In their statement, the bishops thanked the pope for his “brotherly correction”.

“Above all, we want to ask forgiveness for the pain caused to the victims, to the pope, to the people of God and our country for the serious errors and omissions committed by us,” the statement said.

This week’s meeting followed a Vatican investigation into Bishop Juan Barros, who was appointed by the pope in 2015 despite allegations that he had covered up sexual abuse of minors by his mentor, Fr Fernando Karadima.

Now 87 and living in a nursing home in Chile, Fr Karadima has always denied the allegations. Bishop Barros has said he was unaware of any wrongdoing.

However, a Vatican source confirmed on Friday a report by Chile’s T13 television that the pope had handed the bishops a document accusing them of destroying evidence of sex crimes and of failing to protect children from predator priests.

The document said the church hierarchy was collectively to blame for serious lapses in handling the abuse cases.

Friday’s sombre statement came just four months after the pope had visited Chile in a trip that raised questions over his response to abuse scandals that have repeatedly rocked the church over the past 17 years.

During the visit, Pope Francis had staunchly defended Bishop Barros, denouncing accusations against him as “slander” until proven otherwise.

But days after returning to Rome, the pope, citing new information, sent sexual abuse investigator Archbishop Charles Scicluna of Malta to Chile to speak to victims, witnesses and other Church members.

In a statement released on Thursday, the Vatican quoted the pope as saying the four days of meetings this week had been “frank” and had covered “painful events regarding abuses – of minors, of power and of conscience”.

The Vatican said the bishops had agreed to short, medium and long-term changes in order to restore justice and church unity, but did not elaborate. The meeting ended with “the firm intention to repair the damage done”, the pope said. – Reuters