Berlin may stub out pollution with cigarette butt deposit plan 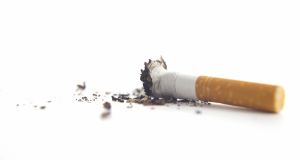 Germans smoke more than 200 million cigarettes every day. Most end up littering the street.

A Berliner has launched a petition demanding a deposit of 20 cent on every cigarette sold in Germany in a bid to reduce litter and environmental pollution.

The campaign, by 49-year-old Stephan von Orlow, has been a runaway success on the petition platform Change.org, attracting 50,000 signatures within days.

“Each day more than 200 million cigarettes are smoked in Germany and the vast majority end up on the street, in parks and, sooner or later, in our waterways,” he writes in the petition. “I’m sure that, with a deposit, we would sideline around 90 per cent of all butts.”

His proposal would see a €4 surcharge on a pack of cigarettes, refundable if the smoker returns the package with all butts inside. One idea is to force cigarette companies to redesign their packaging to include mobile, sealable ashtrays for ash and cigarette butts. The pack/ashtray could be reusable and should be subject to a deposit, suggests Mr Von Orlow.

In a final suggestion, he proposes that cigarette butts be recycled. “Yes, it can be done,” he insists on the petition website.

The campaign has struck a nerve with Berliners, and will be presented to Berlin’s city-state health minister.

“Every day for the last 37 years I have picked up at least 10 cigarette butts from the ground, I won’t manage it for another 37 years,” said Oliver Simon, a recent signatory. “The problem won’t be solved with understanding or nice words, which is why I support . . . the implementation of your idea.”

At €6-7 for 20 cigarettes, smoking in Germany is more affordable than in many other western European countries. To date Germany’s tobacco lobby has blocked higher taxes on their products and regularly opposes bans on outdoor billboard advertising. The big firms are generous donors to political parties, often covering hospitality costs at their receptions.

Butts are a problem, the industry admits, but blames the carelessness of individual smokers.

Such carelessness at global level has considerable environmental consequences, according to the World Health Organisation. About 4.5 billion cigarette butts – each containing nicotine and lead – are thrown away each year. When it rains, the chemicals are washed into the soil and each discarded cigarette can pollute up to 200 litres of ground water.