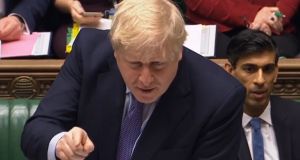 Boris Johnson agreed to negotiate a level playing field for fair competition in the political declaration that accompanied the withdrawal agreement. Photograph: AFP via Getty Images

Britain will reject the European Union’s demand for binding commitments on competition and environmental and social standards in return for a free trade agreement when it publishes its negotiating position on Thursday ahead of the start of talks in Brussels next week.

Mr Johnson agreed to negotiate a level playing field for fair competition in the political declaration that accompanied the withdrawal agreement he negotiated last October. But Downing Street has made clear that the prime minister regards the political declaration as having a different, less binding status to the withdrawal agreement, which is an international treaty.

In the House of Commons on Wednesday, former chancellor of the exchequer Sajid Javid used a resignation statement to condemn Mr Johnson’s move to limit the autonomy of the treasury as being against the national interest. Mr Javid resigned during this month’s cabinet reshuffle rather than accede to the prime minister’s demand that he sack all his advisers and draw instead from a joint pool of advisers with 10 Downing Street.

“It has always been the case that advisers advise, ministers decide, and ministers decide on their advisers. I could not see why the treasury, with the vital role that it plays, should be the exception to that. A chancellor, like all cabinet ministers, has to be able to give candid advice to a prime minister so that he is speaking truth to power. I believe that the arrangement proposed would significantly inhibit that, and it would not have been in the national interest.

“So while I was grateful for the continued trust of the prime minister in wanting to reappoint me, I am afraid that these were conditions that I could not accept in good conscience,” he said.

Mr Javid took a swipe at the prime minister’s chief adviser Dominic Cummings, who was the architect of changes designed to bring advisers across Whitehall under Downing Street’s control.

“I do not intend to dwell further on all the details and personalities – the Cummings and goings, if you will. Much of this commentary was just gossip and distraction, and now it is in the past,” he said.

Although Mr Javid praised the prime minister’s accomplishments in winning December’s general election and taking Britain out of the EU, he warned that the treasury must not be impeded in its role as a fiscal watchdog.

“I am a proud, low-tax Conservative and I always will be. Already, our tax burden is the highest it has been in 50 years. It is fair to say that not everyone at the centre of government always feels the pressure to balance the books – it was ever thus. But the treasury has a job to do. It is the only tax-cutting ministry. Every other department has an in-built incentive to seek and spend ever more money,” he said.