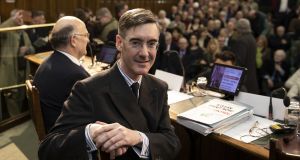 Downing Street is ready to start bilateral talks with Dublin about how to avoid a hard Border in the event of a no-deal Brexit, after Michel Barnier said goods crossing from North to South would be subject to checks.

Theresa May’s official spokesman said Britain would do everything in its power to avoid a hard Border but that Dublin and Brussels had both spoken about the issue of enforcing the EU’s single market rules.

“That’s obviously a matter for the EU’s institutions and I think the Irish government have spoken about the two working together in relation to that. In terms of what we can do, the prime minister has obviously said that we don’t want a hard Border, we will do everything we can to prevent that and we would look to have discussions with the Irish government about steps that we could take,” he said.

“We recognise that we’d need to take forward discussions with the Irish government in the event of no deal. As to when that happens, I have no time frame for you but we stand ready to have discussions.”

Taoiseach Leo Varadkar told the Dáil on Tuesday that if there was a no-deal outcome, the British and Irish governments and the EU “would have to negotiate an agreement on customs and regulations that would mean full alignment so there would be no hard border”.

Mr Barnier, the EU’s chief Brexit negotiator, said on Wednesday there would have to be checks at the Border in the event of a no-deal Brexit, a day after the European Commission’s chief spokesman said so. The commission spokesman on Wednesday sought to row back on his comments but in an interview with the Luxemburger Wort, Mr Barnier said checks could not be avoided.

“There will be checks in case of a no-deal-Brexit. We will do everything possible to enforce them unobtrusively. However, that will not be possible with everything. How should we control animals crossing the border? There will have to be checks. Again, the problem arose from Brexit and we expect the UK to take responsibility,” he said.

The EU regards the island of Ireland as a single unit for animal health but in the event of a no-deal Brexit, the United Kingdom would become a “third country” that could follow different health standards. Mrs May’s official spokesman suggested, however, that the Belfast Agreement obliged Dublin and London to facilitate North-South cooperation over agriculture.

“The Good Friday/Belfast Agreement does spell out certain sets of requirements. You can look at those. We are fully committed to our obligations under that agreement,” he said.

Conservative Brexiteer Jacob Rees-Mogg said on Wednesday that Ireland’s anxiety about what a no-deal Brexit would mean for the Border pointed to a greater willingness to compromise. He said Mrs May could win parliamentary approval for a deal if her withdrawal agreement with the EU was rewritten and the backstop removed from it.

“I think the truth is that everybody wants a deal; the prime minister wants a deal, the EU wants a deal, the Irish want a deal. And if the only way to get it is by re-opening the text, that is what they will have to do. This is realpolitik,” he said.