Move backed by US, Canada and others as thousands take to streets to oppose Maduro 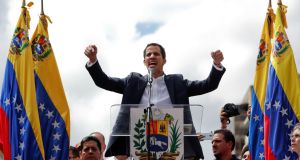 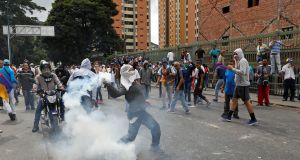 A demonstrator throws back a tear gas canister in Caracas. Photograph: Reuters

Venezuela’s opposition leader Juan Guaido has declared himself interim president, in a dramatic escalation of efforts to force out President Nicolas Maduro, who has overseen the country’s slide into authoritarianism and economic ruin.

The move was immediately welcomed by the US, Canadian and a dozen Latin American governments. Mexico said it would continue to recognise Mr Maduro as president.

US president Donald Trump said he would use the “full weight” of US economic and diplomatic power to push for the restoration of Venezuela’s democracy.

Thousands of protesters clogged the streets of the capital, Caracas, as Mr Guaido, the head of the opposition-run national assembly, raised his right hand and said: “I swear to assume all the powers of the presidency to secure an end to the usurpation.”

The 35-year-old lawmaker said his surprise move was the only way to rescue Venezuela from “dictatorship” and restore constitutional order.

“We know that this will have consequences,” Mr Guaido told the cheering crowd. “To be able to achieve this task and to re-establish the constitution we need the agreement of all Venezuelans,” he shouted.

Security forces fired teargas at protesters blocking a highway in Caracas. Mr Maduro said he was breaking diplomatic relations with the US in response, with US diplomats given 72 hours to leave the country.

Oil-rich Venezuela is mired in economic and political turmoil, with hyperinflation rendering the bolivar currency practically worthless. Shortages in food staples and basic medicines are rampant, and crime is widespread. More than three million Venezuelans have fled, causing consternation across the continent.

The country’s opposition has struggled to find a strategy against Mr Maduro, however, and analysts warned that Mr Guaido’s gutsy move was potentially dangerous.

“It is absolutely clear that the strategy was decided by both the US government and the Venezuelan opposition, so they share the risk,” said Dimitris Pantoulas, a Caracas-based political analyst and consultant. “The government reaction will come shortly and it remains unclear if the people are ready to defend Guaido with their lives.”

Relatively unknown until this month, Mr Guaido stepped into the political limelight earlier this month when he declared himself willing to assume the presidency until new elections are held.

In a statement, Mr Trump described the national assembly as the “only legitimate branch of government duly elected by the Venezuelan people” and warned Mr Maduro not to resort to violence.

“We continue to hold the illegitimate Maduro regime directly responsible for any threats it may pose to the safety of the Venezuelan people,” he said.

A dozen Latin American governments – including the right-wing administrations of Brazil and Colombia – quickly backed Mr Guaido, although Mexico said that it would not change its policy on Venezuela “for the time being”.

Canada’s foreign minister, Chrystia Freeland, said that Mr Maduro’s government was “now fully entrenched as a dictatorship”, and called on him to hand power to the national assembly until new elections were held.

“The suffering of Venezuelans will only worsen should he continue to illegitimately cling to power,” she said in a statement.

In Washington, a senior administration official warned that “all options are on the table” for US action if the Maduro government responded with the use of force against the opposition, but the official focused on diplomatic steps and economic measures that could be taken against Mr Maduro and his top officials.

“If the Maduro regime chooses to respond with violence, if they choose to harm any of the national assembly members, all options are on the table for the United States to respond,” the official said.

“The message is very clear. The US remains resolute in its support for the transition to democracy in Venezuela. The US will not allow an individual, Nicolas Maduro, and his cronies to continue to loot the Venezuela state.”

The sudden developments came as tens of thousands joined marches across the country, and followed two nights of violent protests in working-class neighbourhoods of Caracas – once bastions of support for the government – and the apparent foiling of an armed uprising by members of the national guard.

Morelia Armini, an elderly saleswoman from Caracas, could barely contain her joy at the day’s developments. “This is a wonderful thing,” she said, after watching to Mr Guaido take the oath. “Like a phoenix, this is the rebirth of Venezuela.”

Wednesday also marked the anniversary of the 1958 uprising that overthrew the military dictator Marcos Perez Jimenez – a symbolism that was not lost on Maria de Jesus, a social worker from Caracas who was born on the day of the 1958 rebellion.

“I was born in democracy,” she said on her way to the march in Caracas. “I want my freedom; this is a dictatorship.”

Across town, several hundred supporters held a rival march in support of Mr Maduro. Though it was dwarfed in size by the opposition protest, those in attendance were in a buoyant mood.

“We are here to support our president and defend our resources,” said Ana Media, who works for the state oil company PDVA, as salsa music blasted from loudspeakers. “We know that other countries are against Maduro because they want to take over our resources.”

Analysts have long held that Mr Maduro’s survival depends on the backing of the military, who he has rewarded with senior positions in government and the state oil company PDVSA.

But it is unclear how solid that support is. Mr Guaido and the opposition-held national assembly have sought to peel away the military, offering an amnesty to members of the armed forces who help bring about a return to democracy. This week, authorities arrested 27 national guardsmen who tried to launch an uprising against Mr Maduro.

Mr Maduro has accused the opposition of fomenting violence. “I demand the full rigour of the law against the fascists,” he said on Tuesday night. His allies have also threatened the use of armed pro-government militias – known as colectivos – to quell disturbances.

A previous spate of protests in 2017 left at least 120 dead and hundreds more injured, after Mr Maduro dispatched the national guard.

Foro Penal, a local watchdog, reported on Wednesday morning that 47 protesters had been arrested since protests began on Monday night. Local journalists alleged that authorities in Caracas had attempted to confiscate their equipment. – Guardian