Bye, Bye Britain: The Dutch get ready for a Brexit party 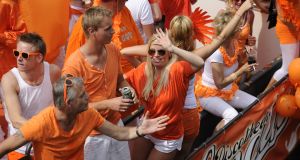 A giant beach party is planned on October 31st in Wijk aan Zee, a quiet seaside village west of Amsterdam facing across the North Sea, where a band will play We’ll Meet Again. Photograph: Vliet/iStock

It’s undoubtedly going to be one of those “where were you?” moments. And already almost 10,000 people in the Netherlands have decided: on October 31st, irrespective of the weather, they’ll be at a giant beach party, facing across the North Sea, with a band playing We’ll Meet Again.

The idea of a huge European “Bye, Bye Britain” party in Wijk aan Zee, a quiet seaside village west of Amsterdam best known for its annual chess tournament, started as a bit of a joke – until suddenly it went viral on Facebook.

Now, says one of the organisers, film maker Ron Toekook, it’s caught the imagination. “Because so many Dutch people live in apartments, there’s a tradition here: you take your deck chair and a bottle of wine and go to the beach to watch the sun setting. Everyone does it. We love it.”

The plan is for plenty of European food and drink – French wine, German beer, Dutch cheese, Belgian fries, Italian pasta, even Austrian strudel – to remind the Brits what they’re giving up, all to be consumed against a soundscape of nostalgic tunes from the previous Battle of Britain.

“We’ll fall asleep to the sound of the waves,” says Toekook. “When we wake up, the UK will have cut itself off from the Continent, and we’ll be ready to go to the aid of the boats full of pro-Europeans.”

If that seems a surprisingly unruffled way to mark a cross-channel parting that could hurt their economy badly – a no-deal Brexit could cost the Netherlands €34 billion up to 2030, or €164 a year per citizen, according to the research bureau SEO – that’s because the Dutch are even more uncertain about Brexit and its implications than the British and Irish are.

On the one hand, they’re being told that Amsterdam, in particular, is “hoovering up” jobs – such as the 900 at the European Medicines Agency – at firms that are abandoning the UK and others that are opting not to go there. On the other, they’re being warned about the impact on the 200,000 Dutch jobs tied directly to trade with the UK.

The problem is that both are true. As to the balance, the country is in “wait and see mode”, says deputy mayor of Amsterdam Udo Kock.

And the figures? According to the Dutch foreign investment agency NFIA, 60 foreign companies and institutions brought about 2,500 Brexit-related jobs to the Netherlands in 2018, increasing the total number of Brexit-related companies Amsterdam has notched up so far to 98.

Another 325 companies – “including some big names”, says the NFIA coyly – have made detailed inquiries that are being taken seriously.

On the down side, the UK is the third biggest export destination for Dutch goods after Germany and Belgium, buying €40 billion worth every year, a huge 9.2 per cent of total overseas trade. A “hard” Brexit, with a reversion to WTO rules, would mean an increase of €628 million a year in administrative fees alone, say KPMG.

At its starkest, according to the IMF, a no-deal Brexit would mean a drop of 0.7 per cent in Dutch GDP. Only Ireland with an eye-watering fall of four per cent would be worse affected.

The biggest potential flashpoint will be Rotterdam, Europe’s largest port and the third-busiest in the world. It’s doing its best to plan. It has employed 300 more customs officers. It has cleared parking space for 200 trucks to minimise waiting time for new permits.

But while the terms of Britain’s departure remain in doubt, it’s impossible to model what will actually happen, only scenarios based on possible outcomes. “How things will work on the British side, in particular, is still a black box,” admits the port’s chief executive, Allard Castelein.

In the end though, the figures are beside the point, says Dutch finance minister Wopke Hoekstra, formerly a consultant with McKinsey – and he’s right.

“In principle, Brexit is bad for the Netherlands, it’s bad for Europe and – I am certain – it will turn out bad for the UK as well. In fact, the only countries who’ll see it as a good thing geopolitically are China and Russia, because it will lead to a weaker, more divided, Europe.”

It’s a sign of the times that one wonders for a second why Hoekstra didn’t mention the US and Donald Trump in the same breath as China and Russia – before remembering that America is the Netherlands’ sixth-largest trading partner. To coin a phrase: It’s the economy stupid.