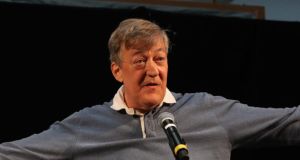 Celebrities were quick to vent their frustration on Twitter after the British prime minister, Boris Johnson, yesterday announced his plans to suspend the current parliamentary session.

The actor Hugh Grant called Johnson “an over-promoted rubber bath toy” in an expletive tweet that has received more than 65,000 retweets and 260,000 likes.

The comedians David Baddiel and Kathy Griffin tweeted their support for Grant’s statement, with Griffin saying, “We need a hell of a lot more of this.”

You will not fuck with my children’s future. You will not destroy the freedoms my grandfather fought two world wars to defend. Fuck off you over-promoted rubber bath toy. Britain is revolted by you and you little gang of masturbatory prefects. https://t.co/Oc0xwLI6dI

I sort of wish that this was the speech he'd given to Billy Bob Thornton in Love, Actually. https://t.co/ljyODjtRXc

OH! A celebrity didn’t “stay in his lane.” We need a hell of a lot more of this. The times we are in our nothing like anything the planet has ever seen. Not hyperbole. As many people, with large platforms, who realize we are losing democracy all over the world should be posting.

Weep for Britain. A sick, cynical brutal and horribly dangerous coup d’état. Children playing with matches, but spitefully not accidentally: gleefully torching an ancient democracy and any tattered shreds of reputation or standing our poor country had left.

.@stephenfry I love you
I love ❤️ your country . This is insane . Crying . https://t.co/vdqCFtcpU7

The 'prime minister' has finally come out as a dictator. I've had enough of being outraged. We must get rid of him and his loathsome gang as soon and as finally as possible.

I’m really disappointed in the Queen

The actor and broadcaster Stephen Fry said Johnson’s decision to prorogue parliament was a “a sick, cynical brutal and horribly dangerous coup d’état”. Courtney Love then responded to Fry, saying that the situation in the UK is "insane".

Branding Johnson and his team a “loathsome gang”, the author Philip Pullman also tweeted that the prime minister has “finally come out as a dictator”.

On Wednesday Johnson said he wanted to prorogue parliament in order to bring forward his Government’s new legislative agenda, focused on Britain after Brexit. The decision has been met with growing anger, with more than a million people signing a petition asking Johnson not to suspend parliament, and thousands protesting in Westminster on Wednesday night.