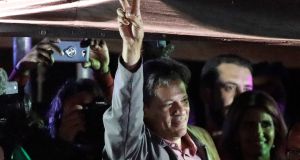 The evening drizzle, rather than a campaign that appears to be stumbling towards its fate, might explain the sparse turnout, but those who do show up to see Fernando Haddad’s final rally in São Paulo on Wednesday night are keeping the faith.

The Workers’ Party candidate in Brazil’s most bitter presidential race in decades is, according to all opinion polls, set to lose on Sunday to the far-right former army captain Jair Bolsonaro. But throughout the evening his supporters keep breaking into chants of “We’re going to cause an upset!”

Haddad himself arrived at the event sounding buoyed up by the latest surveys, which show his rival’s support slipping among evangelical voters, a crucial segment of the electorate. “They [evangelicals] know the meaning of the word ‘lie’. When my opponent starts to lie, they feel betrayed,” he told reporters, referring to the glut of fake news emanating from the Bolsonaro campaign and its supporters.

One of the loudest cheers of the night came when the crowd was told Haddad now leads his rival in São Paulo, the country’s biggest city, 51-49, even though the gap nationally remains in double digits. “I will keep believing he can win until the last vote is counted,” says supporter Patricia Milânia Tosto. “But if he doesn’t manage it we will be part of a pacific resistance until the end because we will never accept Bolsonaro’s ideas.”

As black women, Tosto and her friend Juliana Xavier da Rocha say the rise of Bolsonaro – notorious for his racist, misogynistic and homophobic declarations – has already produced a spike in intolerance towards people of colour and gays, both online and off. “People who share his views feel empowered by Bolsonaro. We are already being attacked. It has left me feeling very sad because I had an idea of a more compassionate society,” says da Rocha.

Haddad’s campaign has entered its last week still taking friendly fire from progressives over his Workers’ Party’s failure to admit any errors during 13 years in power that ended in 2016 with the economy mired in its longest-ever recession, president Dilma Rousseff impeached and her predecessor Luiz Inácio Lula da Silva tangled up in corruption probes that would eventually lead to his imprisonment earlier this year.

This refusal has frustrated Haddad’s efforts to build a broad-based “democratic front” to halt Bolsonaro’s charge to the presidency. The latest criticism of the party came from Mano Brown, one of Brazil’s best-know rappers. At a Haddad rally in Rio earlier this week, he criticised it for failing to engage beyond its own base.

“If you cannot speak the language of the people, you are going to lose. Speaking well of the Workers’ Party to its own supporters is easy. But there is a multitude of people who need to be won over or we are going to fall off a precipice,” he told the crowd, some of whom booed him.

But Haddad said he agreed with Brown’s criticism, saying his party had to reconnect with its traditional base among the urban poor, where Bolsonaro’s harsh law-and-order and anti-corruption positions have allowed him to make significant inroads.

“We have to reconnect with the peripheries, with the pain people are suffering,” he told supporters at Wednesday’s rally, before finishing with a defiant prediction, telling Bolsonaro he will be “spanked” by the Brazilian people on Sunday “because you do not deserve to govern this country”.