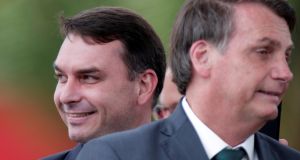 Public prosecutors in Rio de Janeiro have once again linked the family of Brazil’s far-right president Jair Bolsonaro to members of the criminal organisation believed to be behind the murder of a prominent left-wing member of the city’s council.

The latest evidence emerged after a series of raids earlier this week on premises linked to members of the Bolsonaro family as part of an investigation into an alleged kickback scheme operated by the president’s son Flávio when he served in Rio’s state assembly.

Prosecutors said they have concluded that bank accounts controlled by former police officer Adriano Magalhães da Nóbrega were used to launder money taken from the salaries of officials employed in Flávio’s office in the assembly.

Mr Magalhães da Nóbrega is the alleged head of the city’s Office of Crime criminal organisation. A militia mainly composed of serving and former police officers, the group is a prime suspect in the murder last year of councillor Marielle Franco and her driver. Mr Magalhães da Nóbrega’s wife and mother were both employed in Flávio Bolsonaro’s office in the assembly.

Gay, black and from one of Rio’s biggest slums, Franco was a rising force in Rio politics when she was murdered with her driver Anderson Gomes. In March two former police officers were arrested in connection with the crime. One of the men lives in the same gated community as Mr Bolsonaro, the president, in the west of Rio de Janeiro.

Flávio, now a senator in Brasília, previously backed an initiative to legalise Rio’s militias and was the only member of the state assembly to vote against posthumously awarding Franco the body’s highest honour.

Prosecutors presented evidence this week that Fabrício Queiroz, a friend of the president’s since their days in the military, received €445,000 in 483 deposits made by employees working in Flávio’s office which the president’s eldest son then used to buy apartments in Copacabana among other investments. A similar investigation into one of Mr Bolsonaro’s other sons, Carlos, who sits in Rio’s city council, is also understood to be ongoing, though no details have yet emerged.

Among the businesses accused of making payments to Mr Queiroz are pizzerias owned by Mr Magalhães da Nóbrega. A leaked July WhatsApp conversation implied Mr Queiroz, who worked as an aide to Flávio, felt he was not receiving enough protection from prosecutors from the Bolsonaros. Flávio denies any wrongdoing and in a video this week said the investigation was an attempt to attack his father. The president said he had “nothing to do” with the case.

The investigation into the senator looked to have been halted in July when supreme court president Dias Toffoli shocked judicial observers by issuing an injunction that denied prosecutors access to data from anti-money laundering authorities. But the investigation restarted after a vote by the full court knocked down Mr Toffoli’s injunction last month.