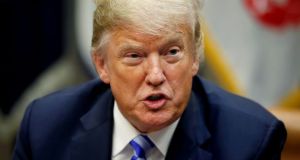 During a campaign appearance, Donald Trump praised the Republican congressman who physically attacked a Guardian reporter.

Donald Trump on Thursday accused the New York Times of committing “treason” after the paper published an opinion piece by an anonymous senior administration official who detailed a “quiet resistance” working to rein in the president.

During a campaign appearance in Billings, Montana, Mr Trump also praised Greg Gianforte, the Republican congressman who physically attacked the Guardian reporter Ben Jacobs last year, as “a fighter and a winner”.

“He’s fought in more ways than one for your state,” the president said of Gianforte, who pleaded guilty to a charge of misdemeanor assault after body-slamming Jacobs on the day before he was elected to the US Congress.

Mr Trump had arrived in the state to campaign on behalf of Republican candidates amid an intensifying battle for control of Congress ahead of the November midterm elections.

But as the president took the stage, the fallout lingered from the anonymous account published on Wednesday in the New York Times. In the editorial, the unnamed administration official wrote of a coalition focused on thwarting Mr Trump’s “worst inclinations”.

Mr Trump told a raucous crowd of supporters: “Nobody knows who the hell he is, or she, but for the sake of our national security, the New York Times should publish his name at once.

“Unelected, deep state operatives who defy the voters to push their own secret agendas are truly a threat to democracy itself.”

Earlier in the day, the White House aggressively pushed back against the column as speculation mounted over the author’s identity. Sarah Sanders, the White House press secretary, tweeted the phone number of the New York Times opinion desk in a bid to amplify pressure on the paper to identify the “anonymous coward”.

During an interview with Fox and Friends, conducted onstage prior to Mr Trump’s rally and set to air on Friday, the president called the paper’s decision to publish the column “very unfair”.

“When somebody writes and you can’t discredit because you have no idea who they are,” Trump said. “It may not be a Republican, it may not be a conservative, it may be a deep state person that’s been there a long time.

“It’s a very unfair thing, but it’s very unfair to our country and to the millions of people that voted really for us.”

Since the editorial was published, the highest-ranking officials in Mr Trump’s administration have publicly denied any involvement. Those distancing themselves from the column have included the vice-president, Mike Pence, and the secretary of state, Mike Pompeo, along with much of Mr Trump’s cabinet. The first lady, Melania Trump, also condemned the author and called on the individual to come forward.

“You are not protecting this country, you are sabotaging it with your cowardly actions,” she wrote.

The editorial was published as the White House was contending with yet another firestorm.

A book authored by the famed journalist Bob Woodward, poised for release next week, chronicles the chaos and dysfunction within the Trump administration. Excerpts released on Tuesday provided an unflattering portrait of the president, who was described by aides in disparaging terms that included being likened to a schoolchild. – Guardian