Bolsonaro appointee taking side of wealthy and powerful

José Toffoli, head of the country’s supreme court, has positioned himself as a guarantor 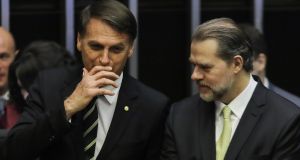 Of all heavyweights in Brazilian public life to emerge as important allies of President Jair Bolsonaro, the most curious is the head of the country’s supreme court, José Antônio Dias Toffoli.

When former president Luiz Inácio Lula da Silva appointed him to the court in 2009 it generated a storm of criticism. At 41 years old, many said he was too young, the youngest appointment ever. Others pointed to his lack of any sort of postgraduate degree and his two failures to pass the public exam to become a lower-court judge.

But the most pointed criticism centred on the allegedly partisan nature of the appointment given Toffoli’s close links with Lula’s left-wing Workers Party, making him the sort of “red delinquent” Bolsonaro promised to sweep from the country.

As a lawyer, Toffoli’s professional career saw him switch between party roles and high-ranking jobs in Workers Party governments. Many feared he was placed on the court to help absolve his former boss, Workers Party strongman José Dirceu, in a trial on charges arising out of the congressional vote-buying scandal that almost toppled Lula during his first term in office.

Toffoli did indeed vote to absolve Dirceu but the man once in line to succeed Lula was convicted by a majority of the supreme court and jailed anyway. Since his release he has been tried and convicted again, this time in the Car Wash anti-corruption probe. He is currently back in jail, as is Lula, Toffoli’s other former boss.

He himself has fared better than his two former mentors. Approaching a decade on the court, no one talks about his lack of juridical ability any more. In the intervening years he has positioned himself as one of the court’s so-called guarantors – justices that guarantee the rights of citizens against the actions of a punitive state.

In practice this means taking the side of the wealthy and powerful.

Brazil’s poor and black citizens get little judicial protection from police violence or the horrors of the country’s medieval penal system, where many remain locked up in inhuman conditions for months or years while on remand often for petty crimes.

Toffoli, meanwhile, has emerged as a key opponent of the methods employed by prosecutors and lower court judges in the Car Wash probes that have roiled Brazil’s political and business elite for the last five years. He is part of a group on the supreme court who have argued that to get results, the investigations have trampled on constitutional guarantees. Anti-corruption campaigners in turn accuse the group of being allied with malefactors.

Those accusations have only increased since Toffoli took over the court’s rotating presidency last year. He was widely criticised for articulating a “governability pact” with Bolsonaro and the leadership of Congress, which raised worrying questions about the separation of powers.

Some saw the proposed arrangement as cover for moves to neutering of the anti-corruption probes. These suspicions went into overdrive when in July, Toffoli issued a temporary injunction that halted a probe into “01”, the president’s eldest son Flávio who is now a senator.

The provisional ruling, which must be voted on by the full court, prevents Brazil’s financial authorities passing on details of suspicious activity to police and prosecutors without prior authorisation from a judge. It stopped in its tracks the investigation of Flávio’s murky financial arrangements when a state deputy in Rio.

The probe was a major threat to the Bolsonaro clan for two reasons.

One, the information it had already thrown up belied the family’s claim to be in any way ethically different from the rest of Brazil’s corrupt political class. Two, it was inching towards clarifying the Bolsonaros’ links to members of the murderous criminal militias that now control much of the underworld in Rio, their political base.

Now, coincidently or not, Flávio has worked assiduously among colleagues in the Senate to kill a parliamentary inquiry into corruption among those sitting on Brazil’s higher courts. Toffoli’s name has been mentioned in plea-bargain deals cut by businessmen caught up in Car Wash. He strenuously denies any wrongdoing.

Flávio’s successful lobbying in defence of the dignity of the magistracy has caused a crisis within the Bolsonaros’ own Social Liberal Party and especially among his father’s army of online warriors. Having thought they had come to drain it, many now worry that he and his sons are leading them ever deeper into the Brazilian swamp.