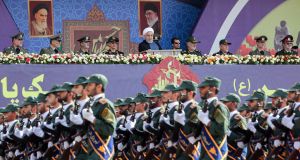 Iranian president Hassan Rouhani views a military parade in Tehran to mark an Iraqi invasion in 1980 which lead to an eight-year war. Photograph: EPA

US president Donald Trump has played down expectations that he will meet Iran’s leaders this week at the United Nations General Assembly.

“Nothing is ever off the table completely, but I have no intention of meeting with Iran, ” he told reporters on Sunday as he left for the annual gathering of world leaders in New York. “That doesn’t mean it doesn’t happen. I’m a very flexible person. But we have no intention. It’s not set up.”

His comments come after the US announced it would send troops and weapons to Saudi Arabia in the wake of attacks on two Saudi oil fields on September 14th. The US has blamed Iran for the assault that struck at the heart of Saudi’s oil infrastructure, cutting production by half, but Iran has denied responsibility.

Announcing the military decision on Friday, secretary of defence Mark Esper said the deployment would be of a “defensive nature and primarily focused on air and missile defence”.

He said while further details of the deployment would be announced this week, the numbers would be “modest” and “not thousands”. Military hardware would also be shipped to Saudi Arabia.

Saudi Arabia, a longtime ally of the US in the Middle East, has been unnerved by the attacks on two oil plants which were claimed by the Iranian-backed Houthis in Yemen. The Trump administration has refrained from responding with military action, instead committing the small-scale deployment to Saudi Arabia and imposing new sanctions on Iran, which it announced on Friday.

Secretary of state Mike Pompeo, who last week branded the oil attack as an “act of war”, denounced the Iranian regime as “bloodthirsty” in an interview on Sunday.

“This was an attack by Iran on the world,” he said. “We’re looking for a diplomatic resolution to this, unlike the Iranians… Apparently the Iranians are bloodthirsty and looking for war.”

He also defended the administration’s Iran policy amidst mixed messages from the Trump administration on Iran since tensions escalated in the region following the shooting down of a US drone over the Strait of Hormuz in June.

“We are well on our way to forcing the Iranian regime to ultimately make the decision to become a normal nation – that’s all we’ve ever asked,” Mr Pompeo said.

Iran again denied involvement in the attack over the weekend. In an interview with CBS in New York ahead of this week’s UN General Assembly, Iranian foreign minister Mohammed Zarif said the attack “didn’t take place from Iran”, noting that the Iranian supreme leader would have had to approve such a measure if it had originated in Iran.

He also described the move by the US to send troops to Saudi Arabia as “posturing”.

Mr Zarif and President Hassan Rouhani are among those attending this week’s annual gathering of world leaders after they were granted visas by US authorities.