Bird flu on farms in UK, Netherlands and Germany

Birds culled and transport of poultry and eggs banned in Netherlands 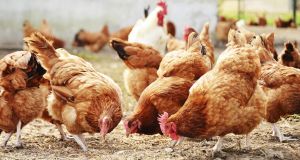 Hens and ducks at the farms in the Netherlands and England are being culled. Photograph: Thinkstock

There has been an outbreak of bird flu on a duck-breeding farm in England and a chicken farm in the Netherlands.

At least one case of the virus at the farm in the Driffield area of East Yorkshire has been confirmed by the UK’s Department for Environment, Food and Rural Affairs (Defra). It said the risk to public health was “very low”. It has put in an 10km restriction zone and is culling all poultry on the farm.

Meanwhile the transport of poultry and eggs throughout the Netherlands was banned yesterday after an outbreak of bird flu was confirmed at a chicken farm in Hekendorp. All 150,000 chickens at the farm, about 40 miles south of Amsterdam, are being culled. The Dutch ministry for economic affairs said the outbreak is deadly to poultry and can also be transmitted to humans.

Dutch authorities said the bird flu was the highly contagious H5N8 strain first detected in Europe less than two weeks ago. The strain, which was found at a farm in northeast Germany on November 4th hit Asia severely, where it led to massive culling of animals in the countries affected.