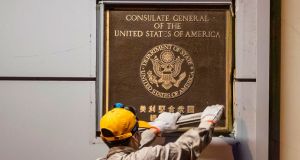 A worker attempting to remove a plate from the front of the US consulate in Chengdu, Sichuan province, China, on July 26th. Photograph: EPA/Alex Plavevski

Consulate watching was the national pastime in China this weekend – from the US mission in Chengdu to Beijing’s outposts in Houston, Texas, and San Francisco.

As Washington and Beijing locked diplomatic horns and relations plummeted to the lowest point in decades, there was plenty of giddy rejoicing and trumpeted nationalism across China, tempered with a wider sense of foreboding.

In the large crowd that had gathered on Saturday to watch the diplomatic withdrawal in Chengdu, a number were also watching footage on their phones from Houston of the eviction of Chinese consulate staff there.

Beijing ordered the Chengdu mission to shut in retaliation for the forced closure of China’s Houston consulate, which Washington claimed last week was a hotbed of espionage and state-orchestrated intellectual property theft.

A cheer went up on the Chengdu street on Saturday as workers removed the US insignia from the mission’s wall – a symbolic underscoring of just how far bilateral relations between the world’s two superpowers had sunk.

Attention in the Chengdu crowd then switched to San Francisco, where it emerged a Chinese researcher who had been holed up in China’s consulate there for weeks had finally been handed over to the Federal Bureau of Investigation (FBI).

Tang Jun, a biology researcher at the University of California, Davis, was one of several Chinese academics who had lied about their status, US officials said, and was actually in the employ of China’s People’s Liberation Army.

Then news came through that a Singaporean businessman had just pleaded guilty in the US to working as a Chinese agent – all adding to the consternation of the crowd gathered outside the US mission.

While thousands came to check out what was happening around the Chengdu consulate, tens of millions of viewers watched live-streamed footage of the activity around the mission over the weekend, beamed across the country by China’s state broadcaster.

Comments flooded in on the platform all weekend, almost all in support of Beijing’s retaliatory action. “China, be proud!” was the message that permeated most prominently.

Tony Wu, an engineering student in a local university, was enthralled with all the diplomatic action, and monitoring his phone shouted out news updates to the Chengdu onlookers.

“It’s like a video game, a quest,” he said. “All these government moves and countermoves, lots of different plots going on, it is so intriguing. But, of course, we are afraid this game could end badly for us.”

“Indeed, it could,” said a political scientist in Beijing, who felt that the nationalistic pride Beijing’s tit-for-tat response had engendered was tinged with a real fear that things were starting to spin out of control and could ultimately harm China in a number of ways.

“It seems this year the whole world is against China. There is definitely an us-against-them feeling developing,” the academic said, who asked not to be named.

China has not encountered so much confrontation on the international stage since the aftermath of the Tiananmen massacre in 1989.

Beijing’s initial mishandling of the coronavirus outbreak and subsequent propaganda and misinformation campaigns fuelled tensions in diplomatic circles, as have its rising authoritarianism, aggressive expansionism, disputed trade practices and allegations of widespread cyber-attacks and corporate and political espionage.

Analysts say that Beijing’s increasingly assertive approach has been driven on one hand by a sense of opportunism – a feeling that now is their time to restructure a new world order more in China’s favour – and also by an ongoing need to improve legitimacy on the home front.

But the dangers of overreach are very real, and the shuttering of the consulates has sent a shudder through the system.

Last week US secretary of state Mike Pompeo said former US president Richard Nixon’s concerns about opening the world to China in the 1970s had been prophetic. “He feared he had created a Frankenstein … and here we are.”

He called on “free nations” to triumph over Beijing’s “new tyranny”, and said: “Securing our freedoms from the Chinese Communist Party is the mission of our times.”

While dismissing Pompeo’s comments as “anti-China bias” and “pre-election shouting”, the Beijing academic said he thought there was a growing realisation in China now that the country had to work to “use soft power and build bridges” to guide key international relationships, particularly the one with Washington, back on to firmer ground.

Even the nationalistic and normally hubristic state-run Global Times newspaper called for a truce in an editorial this weekend. While blaming the US for the “tragic interactions” that led to the recent deterioration, the paper noted that the situation had reached a point that was unimaginable a few years ago.

“No one wants to see a free-fall in China-US relations,” it said. “We want to make it clear that the Chinese side has no intention to escalate” the diplomatic battle.