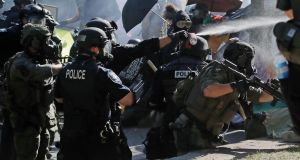 One person was killed when several shots were fired amid a Black Lives Matter protest in downtown Austin, Texas, on Saturday, authorities said.

Footage posted during a Facebook Live showed the moment when several shots rang out in the Texas capital as about 100 people marched and chanted: “Fists up! Fight back!”

Austin police and emergency medical services said on Twitter that one person was killed during the shooting. There were no other deaths or people shot, according to the EMS department.

Initial reports indicate the suspect was carrying a rifle and shot at the victim, who was in his car, police told a briefing. The suspect has been detained, they said.

Protests against racism and police brutality were sparked worldwide following the May killing of black American man George Floyd, who died in police custody in Minneapolis. Mr Floyd died after a police officer knelt on his neck for nearly nine minutes while detaining him.

Also on Saturday, a person was taken to hospital after being shot in Colorado when a car drove into a crowd of people protesting against racial injustice and police brutality.

The Aurora Police Department said on Twitter that protesters were walking on Interstate 225 on Saturday when a vehicle drove through. Police said a demonstrator then fired a weapon, striking at least one person. The person who was confirmed to have been shot was taken to a hospital in a stable condition. Authorities said the vehicle was towed and they are investigating.

Protesters in Aurora also broke windows at the courthouse and a fire was started in an office, police said, with demonstrators ordered to leave after an unlawful assembly was declared.

Protesters in California set fire to a courthouse, damaged a police station and assaulted officers late on Saturday, the Associated Press reported.

Meanwhile, dozens were arrested and many police injured in clashes around Seattle’s biggest Black Lives Matter protest in weeks on Saturday, police said, with a renewed energy sparked by violent clashes between activists and federal agents in nearby Portland, Oregon.

Police said officers used non-lethal weapons in attempts to disperse the thousands of marchers in the late afternoon after some protesters set fire to the construction site for a King County juvenile detention facility and courthouse.

By 10pm (6am Sunday, Irish time), police had “made 45 arrests in connection with today’s riot in the East Precinct”, the Seattle Police wrote in a Twitter post.

It said: “21 officers sustained injuries after being struck by bricks, rocks, mortars/other explosives. Most officers were able to return to duty. One was treated at a hospital for a knee injury.”

US president Donald Trump said on Thursday that he is expanding the deployment of federal police to Seattle, enraging local officials and igniting anger among protesters.

“We saw what was happening in Portland and we wanted to make sure in our city we were standing in solidarity with other moms,” said Lhorna Murray, who attended the protest on behalf of the newly formed Wall of Moms Seattle, replicating a tactic from the Portland protests where mothers, dressed in yellow, form a human wall between protesters and law enforcement.

The tactics of federal officers in Portland have drawn the ire of local leaders and Democrats in Congress, who say those officers are using excessive force and complain of overreach by the Trump administration.

US attorney for the Western District of Washington Brian Moran said in a statement on Friday that federal agents are stationed in Seattle to protect federal properties and the work done in those buildings.

The Trump administration has also sent federal police to Chicago, Kansas City and Albuquerque, New Mexico, over the objections of those mayors. – Reuters/PA/AP