Unknown to most Americans, the US ‘totally destroyed’ North Korea once before

In its Korean War bombing campaign, the US ‘burned down every town in North Korea’

US president Donald Trump, speaking at the UN General Assembly, has said the United States will "totally destroy" North Korea if threatened. Video: The White House 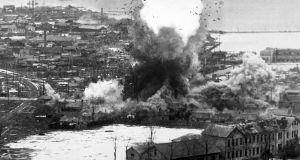 US B-26 Invader light bombers unleash parachute demolition bombs upon supply warehouses and dock facilities at the port city of Wonsan, in southeastern North Korea, in 1951. Photograph: Interim Archives/Getty Images

Foreign tourists in North Korea are invariably steered to the Victorious Fatherland Liberation War Museum in Pyongyang, which documents the isolated nation’s crucible years: the 1950-53 war that split the Korean Peninsula in two.

Rural schoolchildren dressed in military uniform and wearing the bright red neckties of the Youth Revolutionary League listen wide-eyed as guides explain atrocities by the “US aggressors” committed during the war.

Many of these atrocities refer to what Blaine Harden, author and former Washington Post reporter, recently called a “long, leisurely and merciless” US bombing campaign: well over half a million tons of bombs dropped, napalm and chemical weapons deployed, cities levelled.

“Although the ferocity of the bombing was recognised as racist and unjustified elsewhere in the world,” says Harden, for many Americans it was just another conflict in a distant and poorly understood country, he concludes. Not for nothing is it called the forgotten war.

The result was perhaps three million dead and, the museum recalls, the first US armistice in history signed without a victory. In three years of fighting a single major city changed hands: Kaesong, which is now the last vestige of a once hopeful détente with the South.

Air Force general Curtis LeMay, head of the strategic air command during the Korean War, estimated that the American campaign killed 20 per cent of the population. “We went over there and fought the war and eventually burned down every town in North Korea,” he said.

General Douglas MacArthur’s plan to win was a list of targets sent to the Pentagon, requesting 34 atomic bombs to create “a belt of radioactive cobalt across the neck of Manchuria so that there could be no land invasion of Korea from the north for at least 60 years”.

Air Force general Curtis LeMay, head of the strategic air command during the Korean War, estimated that the American campaign killed 20 per cent of the population

Out of the wreckage of that conflict – unresolved to this day – founder Kim Il-sung built his isolated state, squeezed to the north by an old enemy, China, and a new one, the American-backed South. Instead of nursery rhymes, schoolchildren were taught songs about the “American imperialist bastards” and their “lackeys” in Seoul and Tokyo.

Incursions by American spy ships and planes, and huge annual drills by the Americans and South Koreans that still practise invading the North and decapitating its leadership, have worsened the deep official paranoia.

This is the country that US president Donald Trump threatened to wreck in his speech to the United Nations General Assembly. “The United States has great strength and patience, but if it is forced to defend itself or its allies, we will have no choice but to totally destroy North Korea.”

Not known for his deep reading of history, Trump may be unaware that the United States has in fact destroyed North Korea before. And with “next to no concern for civilian casualties, says Bruce Cumings in his book The Korean War: A History.

This amnesia is surely helping to fuel the current build up of tensions. A Gallup poll last week found that 58 per cent of Americans would support military action against North Korea if peaceful and diplomatic means fail.

Where the Americans have forgotten, however, the North Koreans are trained to remember.

North Korean high schools must set aside two rooms for the study of the lives of Kim Il-sung and his son Kim Jong-il: The Benevolent Sun and the Dear Leader – revered grandfather and father of current leader Kim Jong-un - who defeated the “imperialists”.

Schoolchildren spend a sixth of their day in these rooms, surrounded by portraits and episodes from the struggle against the Americans and Japanese. Anecdotes from Kim Jong-il’s life recall the biblical tales of Jesus Christ as he walked among the people.

All this rarely gets a hearing in America. As Cumings recently noted: “All of our media appear to live in an eternal present, with each new crisis treated as sui generis.” But, he warns, “we forget at our peril” that bellicose threats against the North did not start this week.