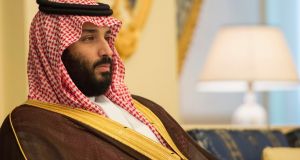 Among the detainees are three popular clerics, a businessman, intellectuals, a poet and Abdel Aziz bin Fahd, son of the late King Fahd, a full brother of current King Salman, who has transferred full authority to favourite son Mohamed.

Seven influential Saudis are in self-exile, including columnist Jamal Kashoggi, sacked from the Saudi-sponsored pan-Arab al-Hayat daily, based in London. He accuses the regime of “unbearable” repression.

The crown prince is highly sensitive to even modest dissent since his domestic and regional policies are failing at a time it is rumoured he could soon ascend to the throne.

The low price of oil – which provides the government with 70 per cent of its income – has prompted bin Salman to draw up Vision 2030, an ambitious plan for diversifying Saudi Arabia’s economy.

The plan called for generating $100 billion in non-oil revenue by 2020 by privatising state assets, increasing the number of pilgrims from eight to 80 million, and establishing a tourism sector. Five per cent of Saudi Aramco, the state oil company, was set to be put on the market in 2018.

A year after its launch, Vision 30 is being revised and the Aramco offer could be postponed until 2019.

The International Monetary Fund predicts Saudi economic growth will shrink from 1.7 per cent in 2016 to 0.1 per cent this year.

The kingdom faces instability. Two Yemenis were arrested last week for plotting to bomb the defence ministry. Last spring the Sunni kingdom’s security forces besieged and shelled a Shia town in the oil-producing Eastern province after activists protested against the demolition of the old quarter to make way for shopping malls and high rises.

Bin Salman has lost the Saudi-stoked war in Syria and the war he started in Yemen, and he is fracturing the unity of the Gulf states by feuding with Qatar. Saudi Arabia and its Arab and western allies are accused of committing war crimes and crimes against humanity in Yemen.

The Sunni Saudis have not been able to counter Shia Iran’s influence in Iraq, Syria and Lebanon, or undermine the six-power deal with Iran for dismantling its nuclear programme in exchange for lifting sanctions.

While US president Donald Trump seeks to scrap the deal, Britain, France, Russia, China and Germany – the other signatories – argue it has prevented Iran from obtaining nuclear weapons, risking conflict and fuelling a regional nuclear arms race.

Saudi Arabia’s multibillion-dollar drive to export its puritan Wahhabi ideology is meeting resistance across the world. Its mosques, religious schools and preachers are no longer welcome in many countries due to the adoption of Saudi Wahhabism by radical jihadis waging war in the region and committing atrocities elsewhere.