Limit of 90 minutes on pub and restaurant visits proposed 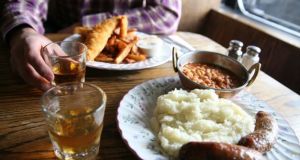 A spokeswoman for the tourism body said pubs and bars would be required to serve a ‘substantial meal’ to customers. Photograph: iStock

Pubs reopening at the end of the month will be required to serve a substantial meal costing at least €9, according to new guidelines to be published in the coming days.

Fáilte Ireland has also said new guidance for food businesses from the Health Protection Surveillance Centre (HPSC) will include a potential reduction in social distancing measures from two metres to one metre in certain circumstances.

The tourism development agency said it was working with officials in the Department of Transport and Tourism to seek clarity on the guidance.

Sources confirmed on Wednesday the guidelines also recommend customers pre-book visits and limit their length of stay in the pub or restaurant to a maximum of 90 minutes.

Previously the Government had said a relaxation of the two-metre social distancing rule in certain cases to allow the hospitality sector reopen was under consideration.

In a statement on Tuesday, Fáilte Ireland said it would publish its own guidelines for pubs reopening as restaurants on June 29th in the coming days.

A spokeswoman for Fáilte Ireland said pubs and bars would be required to serve a “substantial meal” to customers.

A substantial meal will be defined as one that “might be expected to be served as a main midday or evening meal or as a main course in either such meal”.

The guidance from Fáilte Ireland to pubs will be that meals provided should cost at least €9, the tourism body said.

Adrian Cummins, chief executive of the Restaurants Association of Ireland, said on Wednesday it would “wholeheartedly welcome” the move from two to one metres”.

On the suggestion customers would be restricted to 90 minutes in any premises, he said this would be “extremely hard to police” and added he doesn’t think it is “achievable”.

“We’re in a better position to viably reopen on Monday week. We do have concerns following media reports today with regard to the 90 minute limit in restaurants and the restrictions on walk-ins. We would like to see the medical advice around those until we make further comment,” he added.

“The big question everyone is talking about is how is this going to be policed because they are only guidelines – it’s not law.”

Padraig Cribben, chief executive of the Vintners’ Federation of Ireland, welcomed the draft guidelines but said “from a viability point of view, it’s going to be very challenging”.

Mr Cribben told RTÉ radio’s Morning Ireland it was important to point out the restrictions only applied to pubs that would serve food, and not the normal “wet pub” – but that a one-metre restriction was still considerably better than the alternative of two metres.

“It will still be very restrictive, even at one metre seating capacity will be reduced by 35 per cent. But it is better than two metres.”

Pubs were initially intended to be permitted to reopen on August 10th under the Government’s five-phase plan, but this roadmap was condensed to four phases in recent weeks.

Under the accelerated plan pubs will be allowed to reopen at the end of this month if they operate as restaurants serving food.

Previously Dr Tony Holohan, the State’s chief medical officer, had said pubs operating as restaurants would not mean several people meeting up “for a few pints and having a packet of peanuts”.

Pubs reopening as restaurants would not need a restaurant licence to do so, the Government has said.

The deaths of a further three people with coronavirus were reported by the National Public Health Emergency Team on Tuesday, along with 14 more cases of the virus.