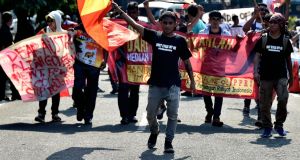 East Timorese students in Indonesia participate in a rally in front of the Australian embassy in Jakarta on March 24th, 2016. They sought “good faith” to end a long-running dispute over oil and gasfields in the Timor Sea. Photograph: Bay Ismoyo/Getty

At the end of next month Timor-Leste will celebrate the 20th anniversary of its 1999 referendum on independence. Marred by appalling massacres by Indonesian forces, the poll nevertheless ushered in a UN administration that ended, in 2002, with full independence.

After centuries of colonisation and a brutal 24-year occupation, full statehood has brought tangible benefits. Parliamentary democracy is in rude health. Malaria is almost eradicated. There is a vibrant gay scene. And this small southeast Asian country has now enjoyed 13 years of unbroken peace.

Under the backdrop of picturesque mountains clad in eucalypt forest, downtown Dili is bustling as locals await the arrival of the ferry from Oecussi.

In the grand scheme of things, their ship has already come in. Provided a 2018 maritime border treaty with Australia is ratified this August, Timor-Leste’s 1.3 million people will be the owners of 70-80 per cent of oil and gas revenues from the Greater Sunrise oilfield, worth anything from $16-$40 billion (€14-€35 billion).

With more than 750,000 people of working age and widespread child malnutrition, how the Change for Progress Alliance (AMP) government invests this money will have huge consequences.

Under the maritime border treaty, there are two options.

The Darwin LNG plan, recommended by a UN-backed conciliation commission, involves processing the oil and gas, either on a floating platform or in Darwin, using existing infrastructure. This plan gives 80 per cent of revenue to Timor-Leste, also known as East Timor, and the rest to Australia, with guarantees of ancillary benefits to Timorese workers and suppliers.

Yet the AMP coalition has baulked at the prospect of further dealings with its huge southern neighbour.

Although it has led peacekeeping and aid efforts in Timor-Leste since 1999, Australia not only armed Indonesia during the latter’s bloody occupation, but bugged the Timorese cabinet office in 2004 during negotiations on an earlier maritime treaty, which gave Australia a more generous, 50 per cent, share of the Greater Sunrise field.

Under the maritime agreement, this reduces the Timorese revenue share of the project from 80 to 70 per cent.

It wouldn’t be the first time a new nation has gone to great lengths to assert its independence, but the stakes have seldom been higher.

The conciliation commission dryly notes that the Timor LNG plan, is “considered commercially viable by Timor-Leste only”. It requires a brand new petrochemical industry on Timor’s south coast – the multibillion Tasi Mane mega-project.

Fidelis Magalhães is the London School of Economics- and Harvard-educated minister for legal reform. Once a fierce critic of Gusmao’s spending, today he is a strong defender of AMP budgetary priorities, and insists Tasi Mane – a “grand economic experiment” – can help turn Timor-Leste into a manufacturing hub, ending the dominance of agriculture.

To that end, the AMP government has amended the Petroleum Activities Law – ending judicial oversight of all petroleum-related projects over $5 million – and changed the law to transfer some money directly from the petroleum fund to Tasi Mane without going through the budget.

Magalhães insists the government turned down the Darwin option because of “the facts”, and points to a report from consultancy firm ACIL Allen, which envisages $41.7 billion of profit, minus $13.2 billion to be spent on infrastructure.

La’o Hamutuk, a civil society and governance monitor, says the infrastructural cost is closer to $16 billion – about the size of the petroleum fund – which will tie up resources desperately needed to tackle poverty. The group pours scorn on ACIL Allen’s predictions, saying they rely on data provided by the state oil company TimorGap and ignore lost opportunity costs. ACIL Allen did not respond to requests for comment.

“Greater Sunrise is now our only gas or oilfield,” says Adilson da Costa of La’o Hamutuk. “Tasi Mane would absorb billions from the petroleum fund, just when we need investment in water, health, education and tourism.”

A quarter of Timor-Leste’s population has no access to electricity, 42 per cent live in poverty, agriculture is rudimentary and almost half of young children are malnourished.

A study by the UN-backed conciliation commission rejected TimorGap’s assumptions and found that the Tasi Mane project would involve a negative 4 per cent return on Timor-Leste’s equity.

In response, Gusmao issued a scathing eight-page attack on the commission, Australia – and capitalism. Questioned about this on Timorese television, the independence hero said “I don’t care”, framing Tasi Mane as a patriotic struggle which he “will win”.

Yet who will fund it? Gusmao has denied that the petroleum fund will be used in its entirety and has turned to China, where Francisco Monteiro, chairman of TimorGap, held meetings last month about funding.

China has already supplied Dili with military boats and built the country’s presidential palace, ministry for defence and foreign ministry.

“Look at how China has gained control of strategic infrastructure in Sri Lanka, Kenya and Pakistan, ” one western diplomat says. “China would like nothing better than for Timor to default.”

John le Carré, often places his spies in Vienna. So does Kim Jong Un 13:49
Trump orders US to pull troops from Somalia 11:55
Moscow starts mass Covid-19 vaccination with its Sputnik V shot 09:49
Brexit: Johnson and von der Leyen to hold talks as deal goes to the wire 08:54
Scotland: Under the twin shadows of Covid and Brexit 01:00